Home > News > Church urged to strip itself of “vanity, arrogance and pride”

Church urged to strip itself of “vanity, arrogance and pride” 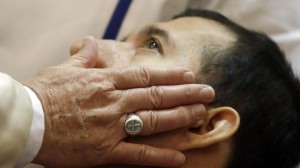 Pope Francis has urged the Church to strip itself of all “vanity, arrogance and pride” and to humbly serve the poorest in society.

He was speaking in the Umbrian town of Assisi where he paid homage to St Francis on his feast day.

In the birthplace of his namesake, the Pontiff hosted a lunch for the poor and told them, “Many of you have been stripped by this savage world” which “does not give employment [and it] does not care if there are children dying of hunger.”

The first item of Pope Francis’s one-day Assisi itinerary, which began just after 7am, was his meeting with young people with severe mental and physical disabilities at the Serafico Institute.

At one stage in his address at the Institute, the Pope set aside his prepared text and said Jesus was making himself heard among the cries of the children.

“These children are the very wounds of Jesus, they need to be listened to and to be recognised. Jesus is hidden in their wounds,” the Pope said.

In Assisi, the Pope also referred again to the boat tragedy at Lampedusa in which as many as 130 people drowned. The Pontiff railed against a modern world in which the culture of rejection and a throwaway mentality predominates. The victims of this culture, he said, are nearly always “the weakest and the most fragile”.

During the course of the day, Pope Francis once again returned to the theme of the poor and in the Sala Della Spoliazione, the room in the bishop’s palace where in 1206, Francis removed his clothes, renounced on his family’s wealth and gave himself to God, Pope Francis said, “Christ is God, He was born naked in a manger and he died naked on the cross…”

He added, “Francis stripped himself of his egotistical pride and he distanced himself from the longings of this world, from money which is a false idol that possesses man. We are all called on to be poor, to strip ourselves of our trappings and for that reason we have to learn to be with the poor.”

He returned to the theme during Mass in the courtyard of the Basilica of San Francesco, when he said that St Francis had impoverished himself “in order to enrich us” and that he had been moved by a love for all of creation.

“Francis was a man of harmony and peace. From this city of peace, let me say it again with the force and mercy that comes from love. Let us respect every human being, may all armed conflicts which spill blood be stopped, may all weapons be laid down, and may hate make way for love everywhere.”

He said St Francis also teaches “that everyone who follows Christ receives true peace”, which only Christ can give and the world cannot. But he warned that “Franciscan peace is not something saccharine.”

“Hardly! That is not the real St Francis! Nor is it a kind of pantheistic harmony with forces of the cosmos… That is not Franciscan either,” he continued. “It is a notion some people have invented,” he warned.

“The peace of St Francis is the peace of Christ, and it is found by those who ‘take up’ their ‘yoke’, namely, Christ’s commandment: Love one another as I have loved you. This yoke cannot be borne with arrogance, presumption or pride, but only with meekness and humbleness of heart,” he said. 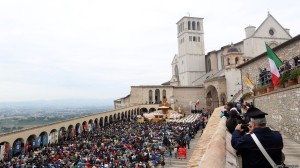 St Francis “bears witness to the need to respect all that God has created, and that men and women are called to safeguard and protect, but above all to bear witness to respect and love for every human being.”

“From this City of Peace, I repeat with all the strength and the meekness of love: Let us respect creation, let us not be instruments of destruction! Let us respect each human being,” he said.

He called for an end to armed conflict and for care for those who are suffering and dying because of violence, terrorism or war in the Holy Land, in Syria, throughout the Middle East and worldwide.

He concluded by petitioning St Francis to obtain the gift of God’s harmony and peace for the world.

Before the final blessing, a special lamp filled with oil from Umbria, was lit. The Pope then prayed a special prayer for Italy, of whom St. Francis is the patron.

During the course of his eleven-hour visit, the Pope also made time to visit the Church of St Damian where St Francis prayed during the 13th century in a crumbling church before he heard Jesus speaking from the Cross, asking Francis to repair the Church.

The Pope also venerated the tomb where the Saint is buried and visited the Basilica of St Clare and venerated her tomb, and greeted the nuns there.