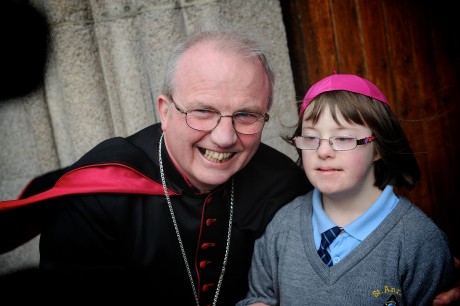 “It’s great news for Derry!” was the reaction of Archbishop Eamon Martin of Armagh when asked by CatholicIreland.net about Pope Francis’ appointment of Bishop Donal McKeown as Bishop of Derry.

“I am delighted to share in the joy of my home Diocese of Derry. I know the people and the priests have been waiting very patiently for the appointment of a new bishop, as it is some time since Bishop Hegarty resigned,” he explained and added that “Bishop Donal brings many gifts to his new role.”

A native of Derry himself, Archbishop Martin acted as diocesan administrator in Derry prior to his ordination as Coadjutor Archbishop of Armagh last April.

The future leader of the Irish Church explained that he got to know Bishop McKeown first as a fellow school principal and later during his time as Secretary to the Bishops’ Conference.

“He is friendly and kind and he has been a great support to me since my ordination as Archbishop. Bishop Donal has experience and understanding of a wide range of issues, especially in education, pastoral renewal, youth ministry and vocations work,” he said.

On a jocose note, he commented, “He has a love for the Irish language and he’s not a bad singer either – that should help him in the ‘town I love so well’!”

He added, “As well as congratulating him, I offer him my prayerful support on the new tasks he is taking on.”

Sixty-three-year-old Bishop McKeown, has been an auxiliary bishop in the diocese of Down and Connor since 2001. He succeeds Bishop Seamus Hegarty who resigned for health reasons in November 2011.

Bishop McKeown has a wealth of media experience and is fluent in Italian and German. He is a former Belfast correspondent for the German Catholic news agency, KNA. He also worked for Vatican Radio while studying theology and philosophy in Rome at the Gregorian Pontifical University in the 1970s.

A native Irish speaker, he did Irish language reports for RTE’s An Saol Mór programme. He continues to be a regular contributor, both north and south of the border, to radio and television as well as having opinion articles published in newspapers and periodicals.

The new Bishop of Derry will lead a diocese of 245,000 Catholics spread across 51 parishes and served by 104 diocesan priests. The Diocese incorporates counties on both sides of the border, consisting of most of Co Derry as well as parts of Donegal, Tyrone and Antrim.

In his address on Tuesday in St Eugene’s Cathedral in Derry, Bishop McKeown said the “Church on this island is experiencing many difficulties.”

Quoting Viktor Frankl, he said, “We have to give people, not just the means by which to live but also a meaning for which to live.”

On the role of the Church, he said it did not seek to control or dominate public discourse but that it had to have a place in the public square and not just in the sacristy.

“As in the case of Jesus, the Suffering Servant, we aim only to speak the language of healing where there has been hurt, to generate hope where the future seems bleak, to model solidarity where fragmentation threatens, to create beauty that can touch the soul.”

On the issue of leadership, Derry’s Bishop-elect said its only task is “to ensure that people on the ground can be helped to blossom, develop and work together in the service of the common good. Leadership is a service, not an honour,” he said.

Referring to his close family and ministry ties with Down and Connor, he said “much of the area covered by the diocese of Derry is new to me.”

“All of my 37 years as a priest have been spent in Down and Connor and almost all of that in Belfast.  So moving to the banks of the Foyle means leaving behind streets and families where I have felt at home. It means moving aside from the network of relations and friendships that have been such an integral part of my being a priest. They have helped to keep my feet on the ground.”

“So, I may come here, wondering what I have to offer but I come with the knowledge that many solid foundations have been laid in the Church of this diocese. Indeed this city has, for many decades, developed its own sense of independence and cultural pride, epitomised in the City of Culture celebrations last year.”

“The local communities in Derry have found ways of cherishing diversity rather than fearing it. And local people of faith from across the Churches have played prominent roles in civic society. You have shown what it means to love your enemies and pray for those who persecute you.”

Responding to the news, the Primate of All Ireland, Cardinal Sean Brady said that having worked with Bishop McKeown for the past thirteen years as a member of the Irish Bishops’ Conference he was an energetic and enthusiastic member of the Councils for Clergy, Education, Pastoral Renewal and Adult Faith Development and Vocations.

He is also the Chairman of the National Committee of Diocesan Youth Directors.

“In all of these areas Bishop McKeown has shown exceptional leadership and enthusiasm,” the Cardinal said and added that he was “Very popular with all age groups” and had led many pilgrimages to World Youth Day events, the most recent one to Rio de Janeiro last July.

Bishop Noel Treanor of Down and Connor paid tribute to his vibrant Christian hope. “He has worked with courage and dedication to develop community relations and to further ecumenical understanding and dialogue. He has worked steadfastly to build solid foundations for peace with justice and to promote reconciliation and respect as the foundation stones of community, civic and public life,” he said.

Bishop Treanor continued, “Promoting vocations to the priesthood and religious life is a core priority of his life and ministry. In this and other arenas, such as education and the European heritage of St Columbanus, Bishop Donal’s ministry has extended to international church life, aided by his exceptional linguistic skills.”

“To his work and ministry at all levels Bishop Donal brings qualities of great personal warmth, energy, friendliness, integrity and courage. His love of the Christian heritage and tradition, of the Irish cultural heritage in all its expressions, of the Irish language, his strong sense of family and of community will surely anchor his ministry to the Church and people of Derry.”

Born in April 1950, Donal McKeown is the eldest of four children of James McKeown, a local watchmaker and Rose, a primary school teacher. Brought up in Randalstown, Co Antrim, he was ordained a priest for the Diocese of Down and Connor in July 1977.

He taught in St Patrick’s College in East Belfast and later became President in 1994 of St Malachy’s College. In 2001, he was appointed as Auxiliary Bishop in the Diocese of Down and Connor.