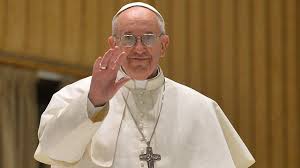 Pope Francis made an appeal on behalf of homeless families after he had finished praying the Angelus with the faithful gathered in St Peter’s Square on the fourth Sunday of Advent.

Prompted by a banner in St Peter’s Square that read, “The Poor Cannot Wait!” Pope Francis spoke of the great difficulties that families without fixed dwelling face.

He said their plight was not unlike that of the Holy Family, to whom the Lord Jesus was born in a barn, and who had been forced to flee their native land into Egypt.

“Family and home go together,” Pope Francis said and added, “I call on everyone: individuals, organs of society, authorities, to do everything possible to assure that every family has a place to live.”

Ahead of the traditional prayer of Marian devotion, the Pope shared a brief reflection on the day’s Gospel reading, which tells of the events that preceded the birth of Jesus from the point of view of St Joseph, the betrothed of the Virgin Mary.

The Pope said that the account gives us the essentials of a true interior drama.

This Gospel, in which Joseph learns of Mary’s unexpected pregnancy and decides to divorce her quietly, before giving himself over entirely to God’s providential goodness, “shows us St Joseph’s greatness of soul,” the Pontiff commented.

Pope Francis went on to say, St Joseph was “a man who always listened to the voice of God, was deeply sensitive to his secret will – a man attentive to the messages that came from the heart and from above.”

The Holy Father concluded by encouraging all the faithful to celebrate the Christmas feast contemplating Mary and Joseph: Mary, full of grace, the woman who had the courage to rely totally on the Word of God; and Joseph, the faithful and righteous man who preferred to believe in the Lord instead of listening to voices of doubt and of human pride.

“With them,” he said, “we walk together towards Bethlehem.”