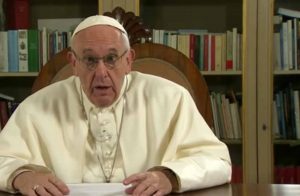 Pope Francis has invited the faithful to take part in Laudato Si’ Week from 16-24 May as part of their commitment to “take care of creation, a gift of God, our good creator.”

In a video message, the Pontiff explains that the week marks the fifth anniversary of his 2015 encyclical, ‘Laudato Si’: On Care for Our Common Home.’

Laudato Si’ Week is sponsored by the Dicastery for Promoting Integral Human Development, whose prefect is Cardinal Peter Turkson.

Dozens of Catholic organisations are involved in the event, including the Global Catholic Climate Movement, Caritas Internationalis and the International Union of Superiors General.

The week offers Catholics an opportunity to look at the steps they have taken to protect the environment and those worst affected by climate change, as well as challenging them to think through how they will continue to take care of creation into the future.

In his video message, Pope Francis says he is renewing his “urgent call to respond to the ecological crisis”.

“What kind of world do we want to leave to those who will come after us, to children who are growing up?” he asks.

This year also sees the UN host a major conference on biodiversity at which it is hoped meaningful targets to protect the places and species that sustain all life will be agreed.