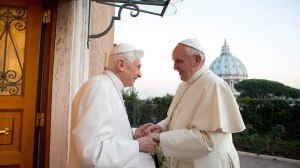 The visit followed an invitation from Pope Francis to Benedict during his visit earlier this week to the Mater Ecclesiae monastery to offer his Christmas greetings.

The Pope and his predecessor were joined on Friday by their respective secretaries.

Archbishop Dominique Mamberti, the Secretary for Relations with States, and Monsignor Peter Brian Wells, Assessor for General Affairs of the Secretariat of State were also present.

Separately, the Vatican has confirmed that parishioners of Roman parishes will soon be attending Mass with Pope Francis in Casa Santa Marta.

Vatican spokesman, Fr Federico Lombardi, said on Friday that beginning in January, the Cardinal Vicar of Rome will be informing pastors how to apply to attend the Pope’s daily Mass with a group from their parish. Each group will probably total about 25 people.

In 2013, groups of Vatican employees usually attended the Papal Mass.

Fr Lombardi said the initiative will allow the people of Rome to interact with their bishop, since the Pope is not able to visit every parish in the diocese.