Home > News > Pope Emeritus to attend Mass for the elderly

Pope Emeritus to attend Mass for the elderly 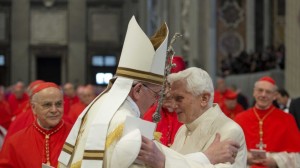 Pope Emeritus Benedict XVI will join Pope Francis on Sunday along with 40,000 elderly men and women for a Mass in St Peter’s Square to honour ‘The Blessing of a Long Life’.

The 87-year-old retired pope was invited to participate by his 77-year-old successor and apparently accepted “readily.”

According to Vatican spokesman, Fr Federico Lombardi, Benedict XVI, who is making his first public appearance since last April’s canonisation ceremony for Saints John XXIII and John Paul II, will be present for only one hour of the four-hour programme.

In many cases, the elderly will be accompanied by their families. The presence of grandchildren has been particularly encouraged by the Pontifical Council for the Family, the Vatican office that organised the meeting.

Pope Francis will be welcomed with a live performance by Italian tenor Andrea Bocelli.

The Pope will meet grandparents in St Peter’s Square during the first international day dedicated to old age. 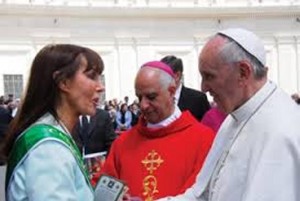 The Catholic Grandparents Association will be represented by its founder, Catherine Wiley, who has been chosen to give a testimony to the Pope highlighting the vocation of grandparents in keeping prayer at the heart of the family and in passing on the faith.

Catherine Wiley will be accompanied by her grandson Tom who will have the opportunity to pose a question to the Pope.

The event is scheduled to begin at 9am in St Peter’s Square and will conclude with Holy Mass at 10.30am.

The event will be broadcast by CTV (Centro Televisivo Vaticano, Vatican TV) and will be streamed live on the web via http://www.ctv.va/content/ctv/it/livetv.html