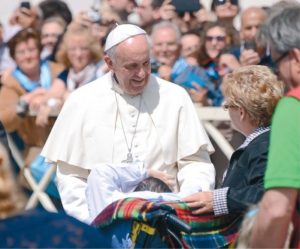 Pope Francis has decided that the World Meeting of Families will be held in Dublin on 22 to 26 August 2018 with the theme ‘The Gospel of the Family: Joy for the World’.

The announcement of the date and theme for the 9th World Meeting of Families (WMF) was made at a press conference in the Vatican this morning.

It was attended by Archbishop Diarmuid Martin of Dublin and the head of the Pontifical Council for the Family, Archbishop Vincenzo Pagila.

The theme aims to take up the inspiration of Pope Francis’ Apostolic Exhortation Amoris Laetitia on ‘The Joy of Love’, the fruit of a Synodal Process which has been taking place in the Church since shortly after Pope Francis’ election.

The Archdiocese of Dublin is the host diocese for this event which takes place once every three years in different parts of the world.

Addressing today’s press conference Archbishop Martin said, “The 2018 World Meeting will be held in Dublin, but it is an event of the entire Church”.

He said it was significant that Pope Francis chose the family as the theme of the first Synod of Bishops of his Pontificate and that he launched a new methodology for the Synod which would involve consultation with families.

“Hopefully the World Meeting will be an important milestone in the application of the fruits of the Synodal process and of Pope Francis’ Apostolic Exhortation Amoris Letitia”, Archbishop Martin said.

The Dublin Meeting will be prepared for by a process of catechesis – based on Apostolic Exhortation Amoris Laetitia (The Joy of Love) and this will take place right across the Church in Ireland during 2017 and 2018.

It is hoped that something of that catechetical process will be shared with other Churches around the world, especially in Europe.

Archbishop Martin said the Dublin World Meeting of Families, more than earlier Meetings, should be a world event even in its preparation.

“The World Meeting of Families in Dublin will hopefully be a festival of witness to the love of God revealed in Jesus Christ. The vocation of Christian couples, supported by the Sacrament of Marriage, is a call to witness to that love and to experience the joy of bringing the love of Jesus to those who are troubled and challenged,” said Archbishop Martin.

It is too early to know if Pope Francis will attend the WMOfF.

His programme is normally announced just a few months prior to any event. The Pope has expressed his desire to attend, and such a visit of the Pope would bring great joy to Irish Catholics and others, but the final decision will depend on a number of factors.

Given the age of Pope Francis, a possible visit of the Pope in 2018 would inevitably have a more restricted programme than that of the papal visit of Pope St John Paul II in 1979.

The first of three national collections intended to help defray the cost of hosting the 9th World Meeting of Families in 2018 will take place in parishes across the country this weekend.

This weekend’s collection will be followed by another national collection next year and a final one in 2018.

The actual Meeting will begin with a major Conference which will last for three days at which international speakers will address the challenges of the family.

The principal events of the World Meeting of Families 2018 will be held in Dublin, but events will also take place in other centres around Ireland.

It is hoped that alongside the events, gestures of solidarity will be fostered, especially with the setting up of a Pope Francis Fund for Homelessness.

Married couples will witness to the contribution of the family to the Church and to society at the Meeting.

Each day will open with a major talk followed by break-out groups on a wide range of theological, spiritual, social and scientific questions on the place of the family in today’s word, and will conclude with Mass.

On the evening of Saturday 25 August a larger function of testimonies will be held to celebrate the place of the family in the Church.  A final Mass will conclude the Meeting on the early afternoon of Sunday 26 August.