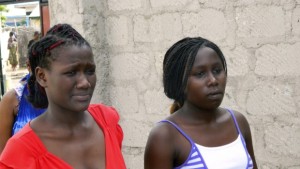 In a message to the Catholic Bishops Conference of Kenya, the Pope expressed his spiritual closeness to the families of victims.

The young people, many of them Christians, were massacred by masked Al Shabaab gunmen from Somalia who stormed the Garissa University College campus and initially killed indiscriminately before freeing some Muslims and targeting Christian students.

In a letter to Cardinal John Njue, President of the Kenya Conference of Catholic Bishops, Vatican Secretary of State Cardinal Pietro Parolin said the Pontiff was deeply saddened by the immense and tragic loss of life caused by the recent attack on the Garissa University College.

“In union with all people of good will throughout the world, His Holiness condemns this act of senseless brutality and prays for a change of heart among its perpetrators,” the statement continued.

Cardinal Parolin said the Pope called upon “all those in authority to redouble their efforts to work with all men and women in Kenya to bring an end to such violence”.

Pope Francis has previously expressed concern over the plight of Christians targeted for their faith, particularly by Islamic State in the Middle East, and has said the international community would be justified in using military force as a last resort to stop “unjust aggression” by groups such as ISIS.

Speaking to Vatican Radio, Fr Nicholas Mutua, the Garissa Diocese Justice and Peace Coordinator and assistant parish priest of St Mary’s Catholic Church in Garissa, described the attack on the university as “barbaric” and said it was carried out by people who have “dead consciences.”

He added, “These are not God fearing people because the Koran urges Muslims to respect “People of the Book” meaning Christians.

Fr Mutua said many Catholic students from the university were very active in the parish and that most of the students were from different parts of Kenya.

According to Fr Mutua, the attack was not entirely a surprise as Al Shabaab had warned they would attack. “There have been threats after some Al Shabaab militants were gunned down by the Kenya Defence forces,” Fr Mutua said.

Asked if he was afraid, Fr Mutua who is not from Garissa said, “Yes..we are afraid.. we feel tense. Even when I am walking in the city, I know I can die any time…and I know some Muslim Imam friends of mine who have been killed for condemning these terrorist attacks,” Fr Mutua said.

He added, “If we run away from this place, who will evangelise the people? A lot of people in the past (missionaries) persevered under difficult circumstances and because of their toil and suffering they planted the seed of faith that we have today,” He said.

The almost 1,000 parishioners of St. Mary’s have to be guarded by security forces each time they go into Church to worship.

Closer to home, Archbishop Diarmuid Martin of Dublin has exhorted the faithful to stand up as a community and say to men of violence, whoever they are, “no more of this”.

In his Good Friday reflection for the Way of the Cross in the Phoenix Park in Dublin, the Archbishop stated, “Violence is never the answer.”

He added that the world is seeing senseless violence “on a scale we have not seen for decades, sadly in some cases perpetrated in the name of God”.

He also highlighted that there are other forms of violence.

Elsewhere in his Good Friday reflection, Archbishop Martin said that we live in a world where facile answers are often the order of the day.

Reasoned argument is responded to with sound bites or one-liners. People are led to think that happiness can be found with empty formula or a good sales line.

Integrity makes the corrupt uncomfortable and those with integrity are often disposed of quickly and ruthlessly, he said.