Home > News > Pope calls for an end to war and conflict

Pope calls for an end to war and conflict 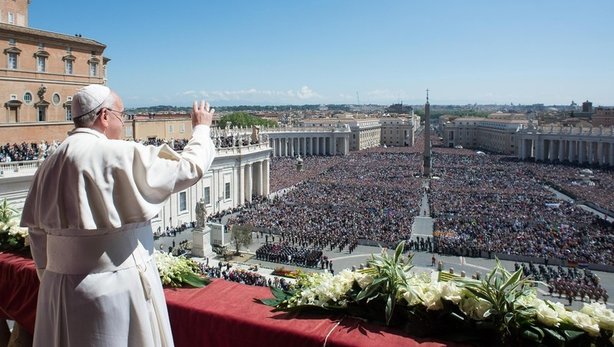 In his Easter Sunday address to 150,000 pilgrims gathered in St Peter’s Square, Pope Francis called for peace in Syria, Ukraine, South Sudan and for an end to the attacks on Nigeria’s Christians.

He also condemned the “immense wastefulness” particularly as so many go hungry and suffer “neglect and dire poverty”.

In his Urbi et Orbi message, the Pontiff asked for prayers for an end to injustice towards the hungry and the vulnerable, especially children, women, and the elderly.

He prayed for migrants and for the sick, particularly for the victims of the Ebola epidemic in Guinea, Sierra Leone and Liberia.

Pope Francis urged the massive crowd of pilgrims to pray that God comfort the victims of kidnapping who could not spend Easter with their families.

The Pontiff also prayed for a resumption of talks between the Israelis and Palestinians.

Speaking after the 10am Easter Sunday Mass, Pope Francis told the 150,000 people gathered to hear his message, that without the fact of the resurrection, “Christianity would lose its very meaning; the whole mission of the Church would lose its impulse, for this is the point from which it first set out and continues to set out ever anew.”

The 90-minute papal liturgy began with the very symbolic rite of Peter, Witness of the Resurrection, traditionally referred to as the rite of the Icon of the Ressurexit, Christ the Redeemer.

This ancient Easter tradition, which fell out of use in the 16th century, but which was brought back into Church practice during the Jubilee Year 2000 by Pope John Paul II, is inspired by the Gospel accounts of Peter’s amazement in seeing the empty tomb and of his encounter with the resurrected Christ.

When the icon is presented at the beginning of the Liturgy, the Pope, as Successor of Peter, also encounters the Risen Christ in the icon and becomes the “first witness”, before the whole Church, of the Lord’s Resurrection.

In a gesture bridging both Eastern and Western Catholics, the Gospels were chanted in both Latin and Greek, after which the choir from the Pontifical Russian College sang the Paschal stichera, as is custom at the papal Easter liturgy when Easter falls on the same day for both Western and Eastern Christians.

The stichera are a series of hymns from the Byzantine rite, which summarize a paschal homily of St Gregory of Nazianzus,

As well, rather than the Angelus, which reflects on Jesus’ Incarnation, the Mass closed with the Regina Ceoli, the Marian Antiphon prayed throughout the Easter season, which meditates on Jesus’ Resurrection.

Following the Easter message, the Pope imparted his blessing Urbi et Orbi, to the city and to the world, which is accompanied by a plenary indulgence for all the faithful taking part in the celebration, either in person or through the various communications media, under the four usual conditions.

The Pope concluded thanking the 30 Dutch florists who donated more than 35,000 flowers to decorate St Peter’s Square and the area around the altar.