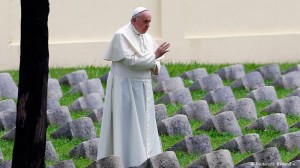 Pope Francis has asked people to pray for “those whom no one remembers” and who rest in common graves or who are forgotten.

The Pope marked the Feast of All Souls with Mass on Sunday at Rome’s Verano cemetery during which he hailed “the anonymous who rest in common graves as unknown saints”.

The Pontiff reminded pilgrims that they had celebrated the Solemnity of All Saints on Saturday and on Sunday the liturgy invited them to commemorate the faithful departed.

“These two are intimately linked to each other,” he said.

Pope Francis said that on the one hand, the Church rejoices through the intercession of the saints and blesseds who support it in the mission of proclaiming the Gospel.

On the other, the Church, like Jesus, shares the tears of those who suffer the separation from loved ones, and like Him and through Him, echoes thanks to the Father who has delivered us from the dominion of sin and death.

Noting that across the weekend, many people had visited cemeteries, he said it was lovely to think that it will be Jesus who will awaken us from death.

“Jesus himself revealed that the death of the body is like a sleep from which he awakens us,” he said.

But on the Feast of All Souls, he said the faithful were called to remember everyone, even those whom no one remembers.

“We remember the victims of war and violence; the many ‘little ones’ of the world crushed by hunger and poverty.”

“We remember the anonymous who rest in common graves.”

“We remember our brothers and sisters killed because they are Christians; and those who sacrificed their lives to serve others.”

“We especially entrust to the Lord, those who died over the last year,” he prayed.

The Pontiff said Church tradition has always urged prayer for the dead, particularly by offering the celebration of the Eucharist for them: “it is the best spiritual help that we can give to their souls, particularly to the most abandoned ones,” he said.

Pope Francis added that remembering the dead, caring for their graves and prayers of suffrage, are a witness of confident hope, rooted in the certainty that death is not the last word on the human fate.

He added that death is not the last word, because man is destined to a life without limits, which has its roots and its fulfilment in God.