Home > Featured > Pope for audience with families with Huntington’s Disease

Pope for audience with families with Huntington’s Disease

Irish families and a mother and daughter from the home town of Pope Francis are among those attending an audience in Rome. This is the first Pope to publicly recognise Huntington’s Disease (HD) as he attends the world’s largest gathering of people with the disease. 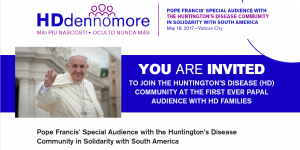 This event, promoted as HDdennomore (Hidden No More), was planned as a thanks to families from Colombia, Venezuela and Argentina who, more than 25 years ago, provided the samples that led to the identification of the HD gene.

“It will be the first major international public recognition of a disease from which as many as a quarter of a million Catholics also suffer,” stated Patricia Towey, information and services co-ordinator, Huntington’s Disease Association of Ireland, in a column in the Irish Times.

Around 750 people suffer with HD in Ireland and there are more than 3,000 at risk. Pauline Doran (67), her son Joe and daughter Anne are travelling from Longford to Rome for the audience.

Pauline lost her husband John to HD in 1999, and their son Joe has also being diagnosed with the disease. As his health has deteriorated, he has had to give up work and driving. Pauline Doran is his carer, and her siblings and extended family have been very supportive. Some of them are also present in Rome for the meeting.

The USA’s Hereditary Disease Foundation and its president Dr Nancy Wexler are participating in this historic meeting in the Vatican. 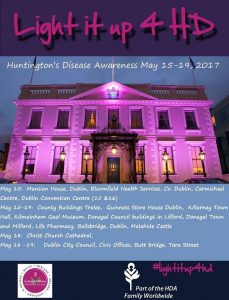 “Even today, men, women and children with Huntington’s Disease in South America and around the world are hiding in the shadows. This audience with Pope Francis will shine a bright light on Huntington’s Disease and help dispel the stigma and fear that multiplies the suffering of patients and families. We are honoured to participate and deeply grateful to Pope Francis and the Vatican,” said Dr Wexler.

Huntington’s Disease is an incurable genetic brain disorder which affects nearly a million people globally. It damages people’s physical and mental abilities, often during their prime years. Symptoms include involuntary movements as well as challenges to conscious intellectual activity such as thinking, reasoning or remembering, and psychiatric problems that have forced many affected to hide it for fear of discrimination and unfair treatment.

A particular focus of the event is the difficult situation in South America, with poverty and inadequate healthcare and social welfare support. Daughter and mother Brenda and Norma, who live in Buenos Aires, Argentina, the home town of the Pope, are to feature on a YouTube video and are attending the meeting with Pope Francis.

It is hoped that the Pope can also inspire the Catholic Church in South America and the global community to help improve their situation.

“Pope Francis is the most prominent international voice to speak for HD families across the world who are mostly too scared to go public. The global platform he offers has the capacity to change how this disease is handled and how the families are treated. His philosophy of mercy over doctrine has allowed for this historic event this week in Rome,” stated Patricia Towey.

Live streaming of the papal audience on Thursday 18 May starts at 11:30 am at www.youtube.com/user/vatican?app.