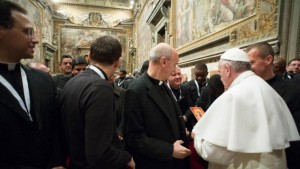 Limerick parish priest and Jesuit Fr Tony O’Riordan presented Pope Francis with an image of ‘Our Lady Undoer of Knots’ from the shrine in his Corpus Christi Church in Moyross when he met the Pontiff last week.

Fr O’Riordan joined seven hundred other ‘missionaries of mercy’ appointed by the Pope around the world, who came to Rome to hear the Pope’s thoughts on their role over two days.

Addressing the Pope in Spanish, Fr Tony briefly explained the background to the shrine, to which the Pope replied with a big smile, “How beautiful; tell your parishioners to pray for me.”

A local artist from Co Clare did the original painting of ‘Our Lady Undoer of Knots’ for the shrine in the Corpus Christi Church in Moyross.

“It’s six foot by four foot, and when it was unveiled the Papal Nuncio, Archbishop Charles Brown blessed the shrine for us. As far as I know it’s the first ‘Our Lady Undoer of Knots’ shrine in Ireland.”

Fr Tony also attended a special meeting with the Pope to be briefed on his role as a mercy envoy for the Pope in this the Holy Year of Mercy.

He said the Pope gave them very wise pastoral advice telling them that the gesture a person makes in seeking forgiveness is more important than the words they speak.

He also said that the priest is not meant to be a scribe making a list of what they are being told and they weren’t to probe for more information. “It’s enough that the person has come to look for forgiveness.”

Pope Francis told them to be aware that some people who might approach them might feel full of shame and that could be a barrier for them in receiving God’s mercy.

He encouraged them to be ‘symbols of God’s mercy’, saying that in the past and over-reliance on the rigour of the law sometimes meant losing sight of the abundant mercy of God.

Speaking about the Pope himself, Fr Tony said he was clearly a man of deep prayer who believes every word he says and speaks it with conviction.

He said he himself learnt about ‘Our Lady Undoer of Knots’ because of Pope Francis’ devotion to her.

“It’s an image of Our Lady that ordinary people can easily relate to. We all feel knots in our stomach at sometime or other, and to think of her as someone who can undo those knots is a powerful image.”

He and the other priests concelebrated Mass with Pope Francis on Ash Wednesday in St Peter’s Basilica.

“I prefer small churches but once the Mass got under way it was all much better than I expected,” he recalled.

“There were three choirs singing and some music was just fantastic. The Pope himself was solemn but simple and I was able to enter into the whole thing in a very prayerful way”, Fr Tony explained.

He says he did not take for granted the fact that he was part of something special like this in St Peters basilica and to be part of it.

“Rome and the Vatican can often be about priests and fancy costumes but there is a core of people who are working in Rome who are supporting the worst suffering in the world. I think that’s why (perhaps) Rome survives. I come back to a place like Moyross and know that my struggle is part of a larger struggle worldwide.”