Home > Featured > Pope asks for forgiveness for abuse and exploitation

Pope asks for forgiveness for abuse and exploitation 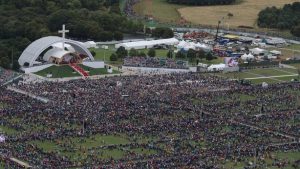 A view of the crowd, estimated at more than 150,000, in the Phoenix Park for the Papal Mass. Numbers were below what was expected, mainly because of bad weather. (Pic: Irish Air Corps)

In the closing Mass of the World Meeting of Families in the Phoenix Park yesterday, Pope Francis asked for forgiveness for a litany of church-related clerical abuse.

The abuse in Ireland ranges from clerical sexual abuse, to separating mothers from their babies, to exploiting those incarcerated in industrial schools and the Magdalene Laundries.

The plea, which Pope Francis read from a handwritten note, came following a private meeting on Saturday between the Pontiff and eight survivors of abuse.

Taking up on what the abuse survivors said to him, Pope Francis said he wanted to place the crimes before the mercy of the Lord and ask forgiveness for them.

Speaking to tens of thousands gathered in the Phoenix Park and to the millions of people watching the event on television and online, the Pontiff said: “We ask forgiveness for the abuses in Ireland, abuses of power, of conscience and sexual abuse perpetrated by members with roles of responsibility in the Church.

“In a special way, we ask pardon for all the abuses committed in various types of institutions run by male or female religious and by other members of the Church. Furthermore, we ask forgiveness for the cases of exploitation through manual work that so many minors were inflicted.

“We ask forgiveness for the times that, as a Church, we did not show compassion, and the search for justice and truth through concrete actions, to the survivors of all kinds of abuse. We ask forgiveness.

“We ask forgiveness for the children who were taken away from their mothers.”

The Pope asked for forgiveness from single mothers and from their daughters and sons who were told it was a mortal sin for them to go looking for one another after they had been forcibly separated. “This is not a mortal sin,” said the Pope, pointing out that by seeking their natural parents these children were obeying the fourth commandment to honour their father and mother.

The Pope concluded the litany with a prayer calling for the Church to do further soul-searching about the worldwide scandals of abuse. He said: “Lord, sustain and increase this state of shame and repentance and give us the strength to commit ourselves so that these things never happen again and justice may be done. Amen.”