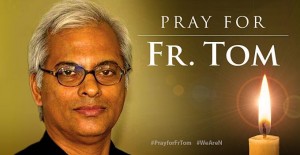 Pope Francis on Sunday appealed for the immediate release of Fr Tom Uzhunnalil, the Salesian who was taken captive on 4 March during the course of a terror attack on a home for the elderly operated by the Missionaries of Charity in Yemen.

Four Missionaries of Charity Sisters were slain along with a dozen other people at the facility in the attack.

The Pope’s specific appeal for the Salesian missionary followed a general appeal for the immediate release of all persons taken captive in war zones.

“In the hope given us by the Risen Christ,” said Pope Francis to the great crowd of pilgrims and tourists gathered in St Peter’s Square for the Regina coeli prayer on Sunday, “I renew my appeal for the liberation of all persons seized in areas of armed conflict: in particular, I desire to remember the Salesian priest, Tom Uzhunnalil, kidnapped at Aden in Yemen this past March 4th.”

On Sunday, Pope Francis also sent a message expressing condolences and promising prayers for the victims of a deadly fire at a Hindu temple in the Indian state of Kerala, as well as for the victims’ families.

Sent via telegram through the Secretary of State of the Holy See, Cardinal Pietro Parolin, the Pope’s message also asked God to bless the whole nation of India.

The message said the Pope was saddened to learn of the tragic fire at the Puttingal temple complex in Paravur and was praying for all affected by the tragedy, and for the relief efforts underway.

Meanwhile, the Vatican has announced that Pope Francis will visit Armenia in June of 2016, accepting the invitation of His Holiness, Karekin II, Supreme Patriarch and Catholicos of All Armenia; of the civil authorities; and of the Catholic Church in Armenia.

At the same time, the Press Office announced that Pope Francis has accepted an invitation from His Holiness and Beatitude Ilia II, Catholicos-Patriarch of All Georgia; and from the civil and religious authorities of Georgia and Azerbaijan, and will make an Apostolic Voyage in the Caucasus, visiting these two countries from 30 September to 2 October 2016.