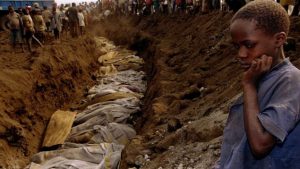 During a meeting with the President of Rwanda at the Vatican on Monday, Pope Francis apologised for the role Catholics played in the 1994 genocide in the African country.

At least 800,000 people, most of them Tutsis and some moderate Hutus, died in the carnage that unfolded over 100 days between April and July 1994.

In his message to President Paul Kagame, the Pope described the actions of those members of the Church who were complicit in the savage campaign of killing as having disfigured the face of the Church.

He implored God’s forgiveness for the sins and failings of the Church and its members, including priests and religious men and women who succumbed to hatred and violence, betraying their own evangelical mission.

He said he desired a “humble recognition” of the Church’s failings of that period and hoped it would contribute to a “purification of memory”, and that it would promote a future of peace and the possibility of Rwandans living and working together.

The Pontiff expressed his solidarity with the victims of the genocide and with those who continue to suffer the consequences of the upheaval.

On 20 November last, the Rwandan bishops issued a statement apologising for the Church’s role in the genocide, saying the bishops’ conference regretted the actions of those who participated in the massacres.

“We apologise for all the wrongs the Church committed. We apologise on behalf of all Christians for all forms of wrongs we committed. We regret that Church members violated [their] oath of allegiance to God’s commandments,” the statement said.

Elsewhere the bishops said, “Forgive us for the crime of hate in the country to the extent of also hating our colleagues because of their ethnicity. We didn’t show that we are one family but instead killed each other.”

The statement was read out in parishes across the country and was seen as a step forward in Rwanda’s efforts at reconciliation.

In Monday’s meeting, Pope Francis also discussed with President Kagame efforts towards social, political and economic stabilisation of the country and collaboration between the State and the local Church for national reconciliation and in the consolidation of peace.

The Pope also expressed concern for the large number of refugees and migrants in need of help and support from the international community and from regional structures.

There are just over five million Catholics in Rwanda, representing just over half the total population.

The country is divided into nine dioceses including one archdiocese.