Home > Featured > Pope accused of heresy – but are his critics divorced from pastoral reality?

Pope accused of heresy – but are his critics divorced from pastoral reality? 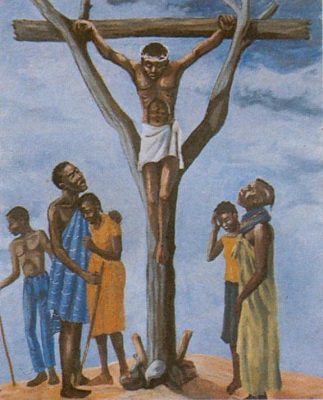 An African depiction of Our Lord’s crucifixion.

Pope Francis has been accused of heresy over his view that remarried divorcees are not absolutely banned from receiving Communion.

The controversy has surfaced as Ireland prepares to hold a referendum to fast-track the country’s divorce provisions.

The pontificate of Pope Francis is very different from those of his predecessors, with his supporters claiming that he represents a kinder Church. An example is his March 2016 apostolic exhortation, Amoris Laetitia, where a footnote states that the Eucharist “is not a prize for the perfect, but a powerful medicine and nourishment for the weak”.

Pope Francis’s opponents see this, and other statements, as allowing those who are not in a state of grace to receive Communion. The contents of Amoris Laetitia were challenged by four cardinals who wrote a letter in September 2016 containing five questions, known as dubia, seeking clarification of the Pope’s understanding of Church teaching – but he did not respond.

In 2017, 40 clergymen, lay scholars and theologians jointly presented Pope Francis with a 25-page document, Filial Correction Concerning the Propagation of Heresies concerning Amoris Laetitia and other “words, deeds and omissions” by the Pope. Again he did not respond to his critics, which now amounted to more than 260 signatories of the Filial Correction.

Now many of those who signed the 2017 document have put their names to an open letter addressed to all the bishops of the world to “accuse Pope Francis of the canonical delict of heresy, and second, to request that you take the steps necessary to deal with the grave situation of a heretical pope”.

In a summary of the letter, the accusers say: “This crime [of heresy] is committed when a Catholic knowingly and persistently denies something which he knows that the Church teaches to be revealed by God. Taken together, the words and actions of Pope Francis amount to a comprehensive rejection of Catholic teaching on marriage and sexual activity, on the moral law, and on grace and the forgiveness of sins.”

In addition to criticising the contents of Amoris Laetitia (“the joy of love”), the signatories of the open letter complain that the Pope has “failed to speak a word in support of popular campaigns to preserve Catholic countries from abortion and homosexuality, for example, before the referendum to introduce abortion into Ireland in May 2018”.

Defenders of Pope Francis point out that the staff in question has a representation of a Y-shaped Furka cross, which was the type of cross most commonly used by the Roman Empire, rather than the very symmetrical and geometrically regular crosses most commonly seen in representations of the crucifixion. As far as using the colours of the rainbow to ornament ecclesiastical objects, the rainbow is a symbol of God’s promise to humanity following the Biblical flood and has long been a symbol of peace, especially in Italy.

It remains to be seen if, and how, Pope Francis will respond to this latest challenge to his authority. Much depends on how the world’s bishops react to the letter.