New member of Carlow community was influenced by an Irish missionary priest and the Legion of Mary. 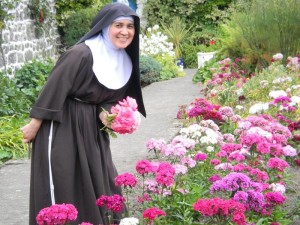 Next month, the Poor Clare community in Carlow will formally welcome a new member who hails from the Philippines and was baptised by an Irish Columban missionary in her homeland.

Sr Analiza will be incorporated into the Poor Clare Community on 24 May, Pentecost Sunday, at the 11.30am Mass in Graiguecullen Parish Church.

In a recent testimony given to the parishioners, Sr Analiza recalled how the first organisation she attended in her local parish church was the Legion of Mary which was founded in Ireland.

“From the beginning Irish people become part of my journey in life. When I was five years old my family migrated to the southern part of the Philippines because of the constant conflict of Muslim and Christian and other rebel groups. Every day we heard of killings and many died in our small place,” she told parishioners.

The Poor Clare Sister, who trained as a pharmacist at university, was from a catholic but not very devoted family.

“My Father was murdered when I was 18 years old. My father’s tragic death was the saddest and most heart breaking moment in my life. I understand and sympathise with those who had the same experience as I had. The pain and the anger takes time to heal.”

Her mother knew that she was interested in religious life but refused to give her consent to allow Sr AnaLiza join a convent, warning her daughter that if she pursued it, she would marry again.

“I did have a boyfriend but the thoughts of having a life partner for myself did not excite me. I was advised to discern my vocation well as it might be only a passing whim. I discerned for years and asked God for a sign but there was no sign given except the sense of emptiness.”

“Every time I visited a church or chapel I heard the same responsorial psalm ‘If today you hear the voice of the lord, harden not your heart’. That passage struck me and I found myself confused and my heart was restless. I asked a priest to direct me, he brought me to a Poor Clare monastery for a retreat and there I found myself very much at peace and happy.”

Explaining her life, she said that “As a Poor Clare I am just an ordinary sister in our community. Our main apostolate is prayer. Outside of prayer, my office or work is to do dishwashing, cleaning and I love doing gardening and cooking also.”

She concluded by saying “there is nothing extraordinary in my life but in this very ordinary life I professed I always encounter God. God is truly present in every event in life and God speaks and reveals Himself to us in a very ordinary way in our lives.”

The Poor Clares have been living in Graiguecullen, Carlow for over 100 years. More information: www.poorclarescarlow.ie