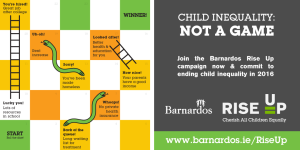 Almost nine out of ten young people from well off homes think they will attend third level education, this drops to three quarters of poorer children.

These are just a few findings of the *Millward Brown survey of young people aged 11-17 for Barnardos.

“Our Rise Up research reveals a nation of young people with similar hopes and aspirations, pastimes and families. What is uncovered, though, are the endemic societal inequalities that limit children from achieving their potential,” said June Tinsley, Head of Advocacy, Barnardos.

“In the coming months Ireland faces a crucial Budget, the start of poignant centenary commemorations of the 1916 Rising, plus a general election.”

“There could not be a more fitting moment to launch Barnardos’ Rise Up research with young people and campaign manifesto, calling for urgent action from all politicians to ensure we are ‘cherishing all children’ equally.”

One of those surveyed pointed out that it costs €13,000 to go to college from the West of Ireland.

“It is particularly humbling to hear the young people’s responses when asked what they would do if they were Taoiseach for the day: ‘Provide free third level education for any child that wanted to study in third level. It costs €13,000 to go to college from the west of Ireland. Not every family can afford it,’ and ‘Give parents enough money to buy food and clothes for their children’.” 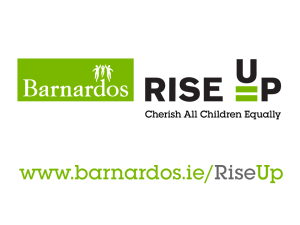 “Our organisation works with young people who have fallen through the cracks through no fault of their own. Every day we are bowled over by the bright, engaged young people we work with and what they have – and want – to offer society. They must be given the opportunity to do so.”

Yesterday (29 September 2015) Barnardos challenged the Government over the rise in child inequality and the devastating impact this is having.

June Tinsley, Head of Advocacy, Barnardos, likened the children’s plight to a game of snakes and ladders – the lucky ones born to well-off, highly educated, healthy parents are much more likely to jump up the ladders and thrive.

Those children born into low income families or ones struggling with their health are much more likely to face extra barriers and slide down the snakes, and this is “perpetuating the cycle of inequality”.