Home > News > PLC tells UN there is no right to abortion

PLC tells UN there is no right to abortion 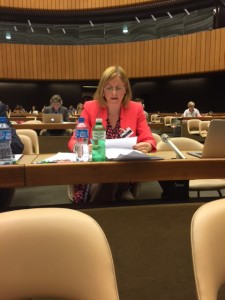 Human rights treaties cannot be interpreted to allow a right to abortion according to Cora Sherlock, deputy chairperson of the Pro Life Campaign.

She was among 40 non-governmental organisations, individuals and other organisations who gave presentations to the United Nations Human Rights Committee in Geneva where Article 6 (The Right to Life) of the International Covenant on Civil and Political Rights was being discussed.

Yesterday (14 July) Cora Sherlock said, “The right to abortion is not supported by the 1948 Universal Declaration on Human Rights which recognises the right to life, liberty and the security of the person.”

“Additionally, the Convention on the Rights of the Child states in its Preamble that the Child ‘needs special safeguards and care, including appropriate legal protection, before as well as after birth’”

She added that it was regrettable that the UN Human Rights Committee had criticised Ireland in the past for its pro-life protections.

Ms Sherlock said the Human Rights Committee had a duty to protect life and not seek to pressure countries to remove human rights from certain sections of society.

“The unborn child is a living human being and is entitled to all of the same rights as other members of the human family. It does not make sense to remove the fundamental right to life from an entire group of human beings.”

“I hope the Human Rights Committee will reflect on its duty to comply with the provisions of the International Covenant on Civil and Political Rights which when properly applied should act to protect human life especially the most vulnerable,” she stated.

Article 6 states that every human being has the inherent right to life; this right shall be protected by law; and no one shall be arbitrarily deprived of his life.

Organisations present include everyone from Amnesty International to Quaker United Nations Office, Society for the Protection of Unborn Children, Association of the Catholic Doctors of Bucharest, Centre for Family and Human Rights, Priests for Life, to WOOMB International.

Speaking about her experience at the meeting, Cora Sherlock referred to testimonies from groups like ‘Silent No More’ and said: “One woman broke down in tears when speaking of how she regretted her abortion.”

“Another participant called for a minutes silence for the millions of babies who have lost their lives to abortion. It was a chilling reminder of the number of people who have not been given the chance to be born.”

Nigel Rodley, Committee Rapporteur for Article 6 in closing remarks, said that the open session was a valuable exercise which had covered issues from practical to deeply conceptual and political, through thoughtful and largely respectful contributions by civil society from all over the world.

Fabian Omar Salvioli, Committee Chairperson, said 115 written documents had been submitted, these and the verbal comments demonstrated the importance of the topic to the global community.

He said that it is timely to open new discussions as the previous General Comment on Article 6 is old. General Comments provide States parties with guidance and the next step will be to prepare a draft General Comment, which after first reading will be sent to States and civil society organizations for feedback.

The 40 statements on abortion split into two main camps – those who say life begins at conception and those who say it begins after birth.

For example the Centre for Reproductive Rights urged the Committee to more fully elaborate on the specific measures States had to take to eradicate preventable maternal mortality, including by guaranteeing access to quality maternal health services.

The Committee should reaffirm that the rights in Article 6 accrued at birth and did not extend prenatally.

The Society for the Protection of Unborn Children stressed that human embryos were equal members of the human species. Denying embryonic and foetal human beings their inherent rights could only diminish the whole of humanity and hinder the search for truth that was the essence of the scientific and human endeavour.

Latin American NGOs stated that the overwhelming majority of non-governmental organizations supported the rights of unborn children from the moment of conception. Science was unequivocal on the issue of when life was started.

WOOMB International said that the Committee had no authority to remove legal protection from the unborn or the suicidal. There were no legal provisions for killings of unborn children or suicidal persons.