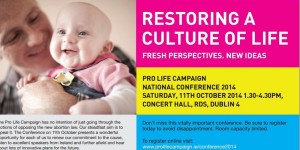 The initiative runs from 1 – 31 October and aims to inform and educate the public on pro-life issue and motivate supporters all over Ireland.

The campaign involves a range of activities and events, with  the Pro Life Campaign National Conference next weekend, being its highlight.

The event will be followed by evening dinner with speakers, spokespeople and friends. Admission is free but donations are welcome.

Among the speakers at next weekend’s conference will be the former girlfriend of Steve Tyler, lead singer of Aerosmith.

Julia Holcomb will share the story of how both she and Tyler came to regret her late-term abortion.

Ms Holcomb never spoke publicly about her abortion story until Steve Tyler wrote about it in his autobiography a few years back when he was a judge on American Idol in the US.

Since then Ms Halcomb has worked with a group called Silent No More, which consists of women who regret their abortion and want to end the spiral of silence surrounding abortion regret.

“It is not often that we get to hear this side of the story – abortion regret, something we know affects so many women,” commented Pro Life Campaign Deputy Chairperson Cora Sherlock. 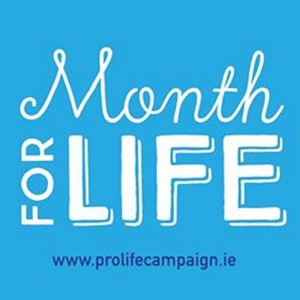 “Julia’s personal story is incredibly compelling and we expect a large attendance at the RDS next Saturday to hear her and the other excellent speakers on the day.”

She said the conference offers an opportunity for people to hear pro-life stories that are rarely heard in the media but “deserve to be heard”.

“I think it is fair criticism to say that the kinds of stories that usually make the news are ones promoting abortion. There is need for some balance in the debate where abortion regret is also discussed and not silenced.”

Ms Sherlock said there was a lot of confusion over what precisely was voted through in the Dáil. “The conference next Saturday offers people a great opportunity to get clarity about what happened and how we can go about rebuilding a culture of life in Ireland.”

Meanwhile, the PLC has also launched a social media campaign, inviting supporters to adopt the MonthForLife avatar on Facebook and Twitter (see above).

As part of the MonthForLife campaign, a number of pro life speakers will be address the public at church services around Ireland this weekend.

Following the national conference, there will be a series of regional public meetings on the topic ‘Restoring a Culture of Life’:

Other events in the MonthForLife are a ‘Hike For Life’ on 18 October and 26 October along the coastal path from Bray to Greystones (meeting at the Bray Bandstand at 1pm); 25 October PLC O’Gorman Academy: Youth Human Rights Advocacy Workshop in Dublin from 10am – 4pm; 31 October a social evening for volunteers and friends to conclude MonthForLife in Dublin. Start time 8pm.