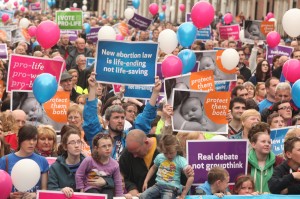 The Pro Life Campaign has attacked the Government over the country’s abortion law following the publication of Department of Health guidelines for doctors implementing the new legislation.

In a statement, PLC accused the Government of misleading the public “every step of the way” on abortion and said that assurances sought by Fine Gael TDs on abortion were “shown to be worthless”.

Commenting on the publication of the guidelines, PLC Deputy Chairperson, Cora Sherlock said the law introduced last year was “presented as emergency legislation needed to save women’s lives. If this were true, it wouldn’t have taken a full year to draw up the guidelines.”

She added that the “truth is the legislation was never about life-saving treatments. It was always about Fine Gael capitulating to the Labour Party, who had campaigned for 20 years for an abortion regime in Ireland.”

The PLC spokeswoman said, “The guidelines confirm that all it takes to sign the life of an unborn baby away is for two like-minded psychiatrists to sanction the abortion without having to produce a shred of medical evidence that it would help save the life of the mother.”

“No amount of spin from the Taoiseach or anyone else can change this sad reality,” Cora Sherlock said.

“Though they may try and play it down, Fine Gael knows that their support for abortion was a significant issue with voters in the recent local and European elections. I can assure them it will be an even bigger issue come the next General Election.”

Separately, a major pro-life rally in Belfast this weekend will hear from parents whose children had life-limiting disorders and who say that better support for families, not abortion, is the answer when children are diagnosed with severe disabilities in the womb.

The annual All-Ireland Rally for Life will begin at Custom House Square in Belfast City Centre on Saturday 5 July at 2pm. The Rally is the biggest event on the All-Ireland pro-life calendar and is held in Belfast or Dublin every year.

A major theme of this year’s Rally for Life is the protection of unborn children with severe disabilities.

Northern Ireland’s Justice Minister David Ford is considering putting forward a proposal that could change the abortion law to permit the killing of unborn babies with ‘foetal abnormalities’ and in cases of rape and incest.

According to Bernadette Smyth of Precious Life, the proposal would have “devastating effects on mothers and their babies throughout the whole of Ireland”.

“Among the thousands of people attending this year’s Rally for Life will be parents whose children had been diagnosed with terminal conditions, to talk about their individual experiences, raise awareness of conditions such as Trisomy 13 and 18 and anencephaly, and to encourage better provision of perinatal hospice care,” she said.

According to Gemma Bradley, a campaigner for Trisomy Awareness, many parents have been told that these conditions are “incompatible with life”.

But she said her baby, Lily Rose, and others with similar conditions are “compatible with love, joy and cherished memories”.

“She was alive, I felt her move, and babies with Trisomy have lived for hours, days and weeks after birth. The length of that life does not make it less of a life,” said Ms Bradley.

Niamh Uí Bhriain of the Life Institute, a speaker at the Rally, said that abortion campaigners sought to broaden abortion laws by using the distress felt by every family facing such tragic news and such a distressing diagnosis.

She said that the voices of the majority of parents were being ignored in the debate surrounding abortion for babies with disabilities, and that the Rally would provide an important opportunity to give those families a voice.

“We’re seeking to support families who need compassion and real help, and both governments, north and south, must listen to parents in these situations who want a better answer than abortion,” said the Life Institute spokeswoman.