Home > Featured > Places of worship must be free from fear

Places of worship must be free from fear 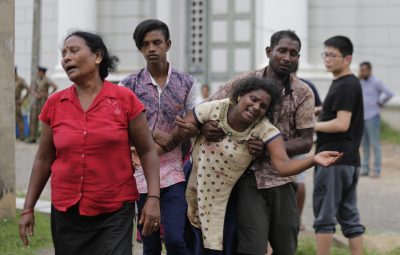 Relatives of a blast victim grieve outside a morgue in Colombo, Sri Lanka. Pic: Courtesy: AP.

Places of worship must be places of peace, free from fear, the Tánaiste, Simon Coveney, said in a statement condemning the weekend’s terror attacks in Sri Lanka.

“I am shocked at the appalling attacks on innocent civilians in Sri Lanka. No political or other cause can justify or excuse the bombing of people at worship or simply going about their daily lives,” Minister Coveney stated.

He stressed that Ireland “strongly supports everyone’s freedom of religion and belief” and added that attacks such as those in Sri Lanka and in Christchurch, New Zealand and elsewhere were “a challenge to us all to do everything that we can to defend that right”.

The death toll of the Easter attacks in Sri Lanka has risen to 290 dead and a further 500 injured.

On Easter Monday, Pope Francis condemned these “inhuman” acts of terrorism. “I pray for the many victims and wounded, and I ask everyone not to hesitate to offer this dear nation all the help that is necessary,” the Pope said.

Catholic News Service has compiled a list of atrocities against Christians by extremists in recent years at Eastertime.

They show that last year four people were shot dead in an attack targeting Christians in the Pakistani city of Quetta on Easter Monday (2 April 2018).

On 27 March 2016, 75 people died and more than 300 were injured after bombs exploded in a park in a Christian neighbourhood of Lahore in Pakistan, as people celebrated following Easter services. The Taliban claimed responsibility.

On 2 April 2015, Christian students were targeted at the University of Garissa, Kenya, on Holy Thursday, leaving 148 people dead.

On 8 April 2012, a suicide car bombing at Easter church services in the Nigerian city of Kaduna killed at least 38 people. The Islamist group Boko Haram claimed they carried out the attack.

In her Easter message, the British Prime Minister, Theresa May, highlighted the plight of persecuted Christians.

“For millions of Christians, Easter is a particularly special time, when we remember the powerful message at the heart of our Christian faith. A message of hope – of the resurrection of Jesus Christ, when we can look forward to a new life in Christ.”

But Mrs May acknowledged that for many Christians around the world, such simple acts of faith can bring huge danger.

“Churches have been attacked. Christians murdered. Families forced to flee their homes. That is why the Government has launched a global review into the persecution of Christians. We must stand up for the right of everyone, no matter what their religion, to practise their faith in peace.”