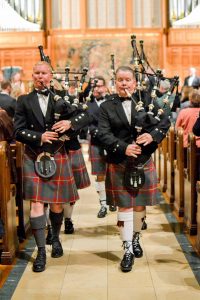 Pipers from the Kevin Ray Blandford Memorial Pipe Band are returning to the East Coast this December to join the company of the 19th annual “Pipes of Christmas” concerts. Photo by Warren Westura.

The renowned Pipes of Christmas concert, which is a staple of New York Christmas events, will this year honour Knock visionary John Curry, who died in the US city in 1943.

The Pipes of Christmas concert has taken place every year since 1999. It is produced by the Clan Currie Society, a non-profit educational and cultural institution which raises funds for music scholarships.

The 2017 concert will see the world premiere of ‘Beautiful Things’, an original composition by acclaimed Celtic composer and harper Cormac de Barra of Dublin.

The piece commemorates the apparition of Our Lady in Knock on the night of 21 August 1879.

Earlier this year, the remains of John Curry, the youngest witness to the apparition, were re-interred at Old St Patrick’s Cathedral in New York from a pauper’s grave in a cemetery belonging to the Little Sisters of the Poor on Long Island. He died there on 27 May 1943 at 69 years of age.

Cardinal Timothy Dolan, Archbishop of New York, presided at the re-interment ceremony, which was also attended by representatives of Knock shrine and the Curry family.

Bob Currie, Commander of the Name and Arms of Clan Currie Society and Executive Producer of The Pipes of Christmas told Catholicireland.net, “We were so inspired by the story of John Curry and his recent reburial at Old St Patrick’s Basilica in NYC that we commissioned a new piece of music honouring his memory and the 1879 vision at Knock.”

John Curry was five years old when he, along with some 20 people from Knock village, witnessed the apparition of the Virgin Mary, St Joseph, and St John the Baptist and the Lamb of God. 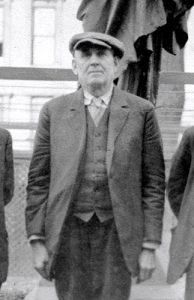 The song title, ‘Beautiful Things’, which is central to this year’s production, comes from John Curry’s personal testimony to a tribunal of investigation into the apparition which took his testimony in New York on 6 July 1937. He told them what he had witnessed on that rainy evening in 1879 and used the term ‘beautiful things’.

In 1911, Curry emigrated to the US in search of work and became a railway labourer in Milwaukee, Wisconsin.

Later, in the 1920s he moved to New York and worked for many years as a labourer and later as an attendant in the City Hospital on Welfare Island, New York.

The Pipes of Christmas concert has become an annual holiday favourite in New York and this year’s performance opens on Saturday, 16 December at Madison Avenue Presbyterian Church, located at 921 Madison Avenue (at 73rd Street) at 2pm. 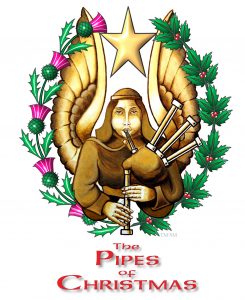 The concert moves across the Hudson River on Sunday, 17 December to Central Presbyterian Church located at 70 Maple Street in Summit, NJ with a performance at 7pm.

The festive concerts offer a Celtic interpretation of favourites such as ‘O Come, O Come Emmanuel’, ‘Joy to the World’, and ‘Amazing Grace’, all performed live on pipes, drums, harp, fiddle, organ and brass, accompanied by readings taken from Scottish, Irish, and Welsh literature.

They also support the National Piping Centre and the Royal Conservatoire of Scotland (both located in Glasgow, Scotland) the Gaelic College of Nova Scotia and Lyon College in Batesville, Arkansas. 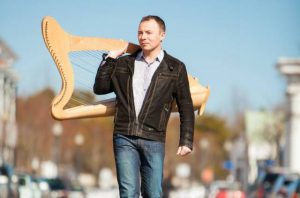 Acclaimed composer Cormac de Barra will debut his new composition ‘Beautiful Things’ on the 1879 miracle at Knock at the Pipes of Christmas concert in New York in December.

Proceeds also support the Society’s sponsorship of the US National Celtic Harp Championship, the Gaelic Literature Competition at Scotland’s Royal National Mod and an annual academic research prize at Sabhal Mòr Ostaig, the acclaimed Gaelic college on the Isle of Skye.

Named one of New York City’s ‘Top Ten’ Christmas events, concert highlights are webcast in high definition over the Christmas holiday to a global audience.

The 2016 production was the recipient of the prestigious Telly Award for broadcast excellence.

Tickets may be purchased online exclusively through SmartTix at www.smarttix.com or by phone at (212) 868-4444.