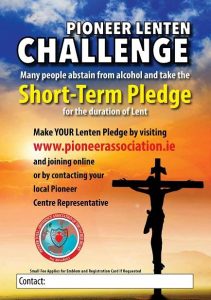 The Pioneer Association is encouraging Catholics and others the length and breadth of Ireland who are trying to give up or try to reduce their alcohol intake for Lent. “We are inviting people to forego the normal natural pleasure attaching to the glass that cheers, during the penitential season of Lent” said  the spiritual director of the Association.

This form of “fasting” is solidly based in Scripture, Fr Bernard McGuckian SJ told CatholicIreland. “The Evangelist’s description of how Jesus dealt with an epileptic demoniac is still applicable to life in our own day”. The disciples could not drive out the evil spirit.  “Jesus answered: ‘This is the kind that can only be driven out by prayer and fasting.’ Along with prayer and alms-giving, fasting is one of the three hallmarks of all genuine religion. Jesus did not hesitate to promise that there is a reward attaching to all three,” he said.

Speaking of the Pioneers, Fr McGuckian said it will be “a far, far bigger movement in this century than it ever was in the past because it has gone to the rest of the world now, and their populations are vast compared to ours”. People are joining the Pioneers “in their thousands” in Africa, where it is present in nine countries, he said. The association is also present in Bolivia and Venezuela, as well as Australia, New Zealand the UK and the US.

“Recently I received a letter from the United States,” said Fr McGuckian.  “A lady wrote ‘why is there not a pioneer centre in every parish centre in the US? If there was, my brother would not be in prison and my two sisters facing premature death because of alcoholism’.”  Currently there are 140,000 pioneers in Ireland although many just take the pledge until they are 18.

The Pioneers were disappointed at the lifting of the ban on selling alcohol on Good Friday, but President of the Association, Mr James Shevlin, said the Association hoped “the change in legislation will at least have the positive effect of curbing any tendency of ‘binge buying’ on Holy Thursday”.

The Pioneer Association was never against the use of alcohol, one of God’s gifts, said Mr Shevlin but rather “promoted and advocated moderation and sobriety in people’s relationship with alcohol”.

The Canon Law of the Catholic Church requires Catholics aged over 14 to ‘fast’ and ‘abstain from meat’ on Ash Wednesday and Good Friday. While alcohol does not break a fast, in practice Catholics often abstain from alcohol on those days as drinking seems contrary to the spirit of doing penance.

In relation to the lifting of the Good Friday ban,  Fr McGuckian SJ said that for almost a century the Irish people approved this self denying ordinance.  “It was in honour of one of the most significant events of world history, the Crucifixion of Jesus Christ, regarded by members of all Christian denominations as the Universal Saviour of the human race.”

“I would say a lot of people who still have a vestige of Christianity would see it as a sober day, a day they want to live quietly,” he added.

Speaking in the Dáil, Deputy Maureen O’Sullivan has pointed out that alcohol is a factor in more than “half of suicides and in the risk of the suicide and a significant factor in self harm. It is the leading cause of death among Irish men aged 15 to 24. We must de-normalise the drinking of alcohol,” she said.