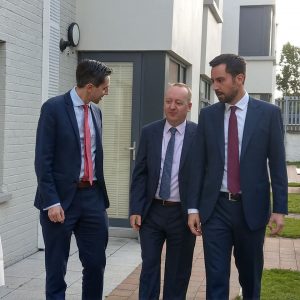 The new national Housing First strategy is a game changer in the State’s response to homelessness, according to the Peter McVerry Trust.

The housing and homeless charity, which was an early supporter and advocate for Housing First, believes that the official State funded expansion of it beyond Dublin will make a huge impact.

“Housing First is built on the right to housing and ensuring that people have intensive wraparound supports to help them keep their homes. Clearly working to address your issues from a stable home with the help of a highly skilled, professional multi-disciplinary team is much more successful than trying to do so from a congregated setting like emergency homeless accommodation or living rough on the streets,” Mr Doyle said.

Mr Doyle said the Housing First model is very much dependent on the availability of housing and, in particular, appropriate housing for single people.

“In recent years that has been hugely challenging. I very much believe that with increased housing output, particularly by local authorities, approved housing bodies as well as the ramping up of schemes to tackle vacant homes, we can look forward to greater availability of housing to ensure the strategy works,” he said.

The Housing First strategy will also be extended to new groups including people leaving the care system and institutions such as prisons.

“Peter McVerry Trust has strongly advocated for such an expansion and recognition of how Housing First could prevent people who are exiting care centres or prisons sleeping rough or accessing emergency homeless services. It is something we have worked closely with Dr Sam Tsemberis, the founder of Housing First, on and looked closely at how his work can be replicated in Ireland,” Mr Doyle said.

Dr Tsemberis is the founder of Pathways Housing First in New York and creator of the Housing First model. He is working with Peter McVerry Trust on a programme to ensure the charity’s Housing First work aligns with international best practice.

He was present at the new strategy launch at Peter McVerry Trust’s social housing development, St Agatha’s Court, in Dublin 1. The strategy was launched by the Minister for Housing, Eoghan Murphy TD, and Minister for Health, Simon Harris TD, along with the National Director of Housing First, Bob Jordan.

Housing First was developed by Dr Tsemberis in the early 1990s. It was originally designed to help people with mental health problems who were living on the streets, but it grew to include people making long stays in homeless shelters and those at risk of homelessness who were discharged from psychiatric hospitals or released from prison.

With some modification to support services, Housing First services are now also used with families and young people who are homeless in North America, Europe and other locations throughout the world.