Church must learn to be a recognisable place of integrity 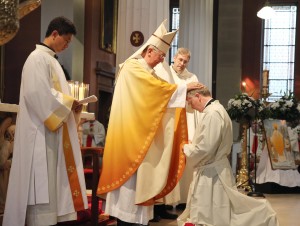 Being pro-life is about defending human life from the moment of conception to the moment of natural death and at every moment in-between, Archbishop Diarmuid Martin of Dublin has said.

Speaking at the Pro Cathedral in Dublin on the Feast of St Laurence O’Toole, the Archbishop said the Church must learn to be a recognisable place where integrity is encountered and where pretence and emptiness are exposed.

The Mass was attended by representatives of various parishes in the Dublin Archdiocese, including those dedicated to St Laurence O’Toole.

The Archbishop concelebrated with Bishops Eamon Walsh and Ray Field as well as priests of the diocese.

During the Mass, the Archbishop ordained a new deacon, Seamus McEntee, and admitted three men, who are training to become permanent deacons, to the office of Reader.

Referring to St Laurence O’Toole and St Kevin, patrons of Dublin, the Primate of Ireland said that “Perhaps more than ever before, the Church in Dublin is being called to go back to its spiritual roots in the face of a culture which is marked by a growing secularisation” but which is also seeking within that secular culture a spirituality for the twenty-first century.

He said the Irish Church must become “a spiritual power-house” like that which inspired Kevin and Laurence O’Toole.

“Within each of our hearts we need to develop our own Glendalough: a space of silence and inspiration, a space for prayer and contemplation, a place of communion with God and with his creation,” he said.

Referring to the popular refrain in which people often say that they no longer wish to be part of the Church, but that they still feel very much that they are spiritual people, the Archbishop asked, “Why is it that our Church does not appear to respond to the desire of spirituality which many people seek today? Where do we look to renew and reform our Church? What is true Christian spirituality?”

True spirituality, he suggested, is not something “just to bolster up our own sense of wellness. Following Jesus Christ is a calling to a robust engagement with the challenges of our society. Christian spirituality is not self-focused but focused on self-giving,” he said.

Sounding an ecological note, Archbishop Martin said all too often the faithful overlook the fact that a spirituality of unity must also involve respecting the harmony which God gave to his creation.

“There can be no spirituality of Glendalough, which ignores this link with the beauty and the harmony of nature,” he said.

He also noted that God’s first revelation of himself to us came in the beauty of his creation.

“Our encounter with nature must be one of responsibility and not exploitation. We have to learn to live leaner. We must learn not to waste. We have a responsibility to shape our lives in such a way as to foster harmony and respect among the human community and within that common home which God has entrusted to us.”

Addressing the new deacon, Archbishop Martin told him that the ministry of deacons is a ministry of service.

“You Seamus will receive the book of the Gospels today and the sacred rite will remind you of the nature of your ministry as a Deacon: ‘Believe what you read, teach what you believe and practice what you teach’.”

Underlining that the prime thirst of contemporary humanity is the thirst for God, the God of love, the leader of the Church in Dublin said Jesus Christ alone can overcome our limitedness and imperfection and permit us live out the word of God and serve our brothers and sisters through a life of integrity and coherence with the Gospel.

“That is the mandate of the deacon.  That is the call of each of us and the roots of Christian spirituality,” he concluded.