Home > News > Pell aims to get Vatican “off the gossip pages”

Pell aims to get Vatican “off the gossip pages” 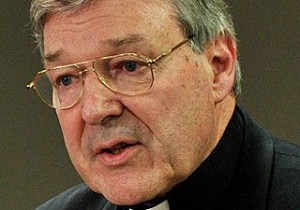 The Prefect of the Secretariat of the Economy, Cardinal George Pell, on Wednesday vowed to get the Vatican “off the gossip pages” where it has featured in recent years due to its chronic financial scandals.

To that end, he announced new initiatives for improving the economic management and administration of the Holy See and Vatican City State.

At a press conference, Cardinal Pell, together with Joseph F X Zahra and Jean-Baptiste de Franssu, deputy coordinator and member of the Council for the Economy respectively, and Ernst von Freyberg, president of the Board of Superintendence of the Institute for the Works of Religion (IOR) outlined the new plans.

The changes are the fruit of a detailed analysis of the conclusions and recommendations of the Pontifical Council for Reference on the Organisation of the Economic-Administrative Structure of the Holy See (COSEA).

All the changes were approved in the recent meetings of the Council for the Economy (5 July) and the Council of Cardinals (1-4 July), and it is expected that they will be approved by the Holy Father.

The changes relate to APSA (the Administration of the Patrimony of the Apostolic See), the Pension Fund, the Vatican media and the Institute for the Works of Religion (IOR).

The Prefect of the Secretariat of the Economy expressed his satisfaction with the fact that the Holy Father has approved these important initiatives. Both Cardinal Pell and the Council for the Economy gave thanks for the Pope’s unwavering support and contributions.

“There are many challenges to face and much work to be done”, Cardinal Pell observed.

“The COSEA has recommended that various issues be faced as a matter of urgency, such as the transfer of the Ordinary Section of the APSA, the Pension Fund, the media and the IOR. The Holy Father has clearly stated that these changes must be made rapidly”.

The Cardinal went on to announce the creation of a small Project Management Office (PMO), directed by Danny Casey, former business manager of the archdiocese of Sydney, to implement and present some of the proposed changes, beginning with the transfer of the Ordinary Section of the APSA to the Secretariat for the Economy.

The PMO will report directly to the Prefect of the Secretariat for the Economy.

In September, the Secretariat for the Economy will begin to prepare the budget for the year 2015.

The aim is for all dicasteries and administrations to draw up a budget to which they will adhere throughout the year.

Spending (within the agreed structure) will be the responsibility of each dicastery and administration.

It will then be compared with the budget in progress during 2015, and the dicastery in question will be accountable for any eventual excess spending.

“We are keen to pursue this work in the coming months”, Cardinal Pell concluded.

Among the moves unveiled on Wednesday:

• A downsising of the troubled Vatican Bank, formally known as the Institute for the Works of Religion. Administering investments from its estimated $8 billion in holdings will be taken over by a new Vatican Asset Management office, reporting to Pell.

• The “ordinary section” of the Administration of the Patrimony of the Apostolic See (APSA), responsible for personal and procurement, will be transferred to Pell’s Secretariat for the Economy.

• Appointment of French businessman Jean-Baptiste de Franssu as the bank’s new president. From 1990 to 2011 de Franssu was an executive with Invesco Europe, an investing firm with $35 billion in assets under management.

• Appointment of one new member to a body of cardinals governing the bank, and of several lay people to a board of directors responsible for routine oversight.

• Creation of two commissions to study the sustainability of a pension fund for the Vatican’s roughly 5,000 employees, and a reorganization of media activity expected to result in a downsizing and greater emphasis on social media.

In an exclusive interview with the Globe on Wednesday, Pell insisted that the reform called for by Francis is “moving in the right direction,” but also conceded he’s run into resistance, perhaps especially among an Italian old guard that feels its power slipping away. “There’s sadness and a bit of antagonism in some quarters, that’s for sure,” Pell said.

Tags: Administration of the Patrimony of the Apostolic See, Budget, Cardinal George Pell, dicastery, Institute for the Works of Religion (IOR), Prefect of the Secretariat of the Economy