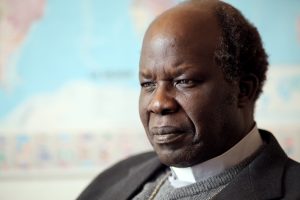 Despite setbacks in efforts to negotiate peace in South Sudan, Auxiliary Bishop Daniel Adwok Kur of Khartoum  says an end to civil war would be the “greatest gift” to the people of that war-torn land.

South Sudan has been an independent country since 2011, when it broke away from Sudan, to the north, making it the youngest independent state in the world. However, since 2013 the country has suffered as a result of a brutal civil war between government forces led by South Sudan President Salva Kiir and rebel forces led former Deputy President Riek Machar. As a result of the fighting, at least 50,000 people have been killed, four million have been displaced and several regions are suffering as a result of famine.

Last year, when the UN declared a famine situation in South Sudan, there were 275,000 children severely malnourished and more than 5 million people urgently in need of food and agricultural assistance. Pope Francis called on the faithful to send food aid to the country “where a fratricidal conflict compounded by a severe food crisis condemns to death by starvation millions of people, including many children”.

This month, a series of peace talks aimed at ending the conflict have been organised between the two parties, but the first round last week in Addis Ababa, Ethiopia, was not successful.

The two sides are due to meet again next week in Khartoum, the capital of Sudan. The UN Security Council has warned that if the two sides cannot broker a deal by Saturday 30 June, both sides will face international sanctions.

In an interview with Aid to the Church in Need, a Catholic charity, Bishop Adwok Kur described providing pastoral care in the Kosti region of neighbouring Sudan, where up to 200,000 people are living spread out across nine refugee camps.

“The people in the refugee camps need to go back and rebuild their broken homes,” said the bishop, who is heading the Khartoum diocesan relief effort. “The people look at the meetings taking place and they say that the greatest gift that could come from all this would be the gift of peace. This peace would allow them to go back to their homes and live in a dignified way, not as they do in the camps where there are so many difficulties.”

The approximately 16,000 refugees being supported by the Khartoum Diocese are in the White Nile region of Kosti, south of  Khartoum. The bishop says they lack plastic sheeting for shelter and food supplies are rationed, resulting in malnutrition for many people.

“The food they have in these camps is not enough. Some of them get only one meal a day,” he said.

While some refugees are able to support themselves after being given permission from the Sudanese government to work in the fields, the government is preventing international aid agencies from accessing the refugees and providing them with humanitarian aid.

Bishop Adwok thanked Aid to the Church in Need for helping the three sisters and two priests who regularly carry out pastoral work in the camps, where there are numerous Christians of many denominations. The charity is also providing Christian education programmes, training in ethics and some emergency help, including food items, for those most in need.