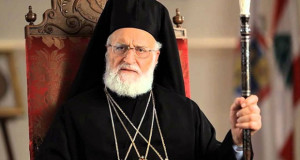 Help from the West for so-called moderate opposition groups in Syria is ending up in the hands of Daesh (ISIS) and other extremists, according to a Catholic Patriarch, who says the crisis in the country is deepening.

In an interview with Aid to the Church in Need, Melkite Greek Catholic Patriarch Gregorios III, head of the largest Catholic community in Syria, said money and weapons given to moderate groups were being repeatedly used by ISIS in the struggle against President Bashar al-Assad.

The Patriarch’s comments come after Mr Assad gave a televised speech on Sunday (26 July) in which he appeared to admit that the opposition’s increased strength meant his forces could not fight on every front against Daesh, the Al-Nusra Front and other militant groups.

Hitting out against the West’s Middle East policies, Patriarch Gregorios said, “If the West helps moderates in Syria in a direct way, it is helping ISIS in an indirect way.”

“If you give money to the weak, moderate groups one day, it will get into the hands of the powerful, militant groups the next. We see this happening every day.”

The Patriarch’s comments come after the US-led coalition delivered airstrikes and military aid to help Syrian Kurdish forces fighting against Daesh in Kobani on the Turkish border and offered support to the Free Syrian Army despite concerns that the aid was being passed – and even sold – to extremist groups.

The Patriarch said that, in spite of this, President Assad’s military successes after more than four years of civil war were varied, adding: “Sometimes the Government makes progress – goes forward – and sometimes it goes back.”

With the Pope last Sunday (26 July) renewing calls for the release of Fr Paolo Dall’Oglio almost exactly two years on from his abduction, Patriarch Gregorios said he had no information about his whereabouts, or that of six or more other priests and bishops kidnapped in Syria.

The Patriarch said, “Who knows what has happened to them. Who knows if they are still alive.”

He went on to say that the people’s “increased hardship” over the past few weeks and months was prompting an upsurge in Christians and others fleeing their homes.

“Daily, the people are leaving the country – some with visas, some without. Sometimes, people take with them thousands of US dollars in the hope of getting to Europe – leaving themselves open to exploitation or worse.”

He reported that at least 450,000 of Syria’s Christians were either internally displaced or living as refugees abroad. 40,000 Christians were now in Germany and 50,000 in Sweden.

“The situation is very difficult for us to provide precise figures as regards the number of our people leaving.”

But he added that, despite the sharp decline in the Christian presence in parts of the country, the faithful were returning to other regions which were now comparatively safe.

He highlighted Maaloula, the Christian town and shrine near Damascus, which fell to Islamist forces in 2013 but which was reclaimed by Government forces.

The Patriarch said 450 Christian families – 2,250 people – had now returned to Maaloula, with many others returning to Homs, Marmarita and the Valley of the Christians which again had been wrested from the control of Islamists.

The prelate added that in spite of the decline of the Christian presence in Syria, he was “confident” the Church would survive.

“We will fight and do everything we can to keep Christians as much as possible in the birthplace of Christianity. Christians in the Middle East have an important role – mission, presence and dialogue. We are not just concerned for Christians; we try to promote dialogue and we care for all the people.”

He praised the work of Aid to the Church in Need which is providing emergency aid and pastoral help for people fleeing persecution – food and shelter, education and Christian catechesis, Mass stipends, help for Sisters and other clergy, especially to those ministering to people in greatest need.

The Patriarch said, “Thank you ACN for your encouragement, for your support, speaking up for our needs and doing what you can to help us in the Middle East and other parts of the world.”