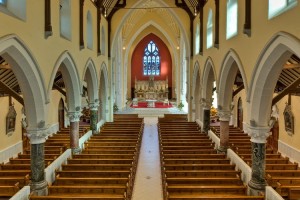 A midlands parish badly affected by the property crash has asked parishioners to dig deep and help alleviate a million euro parish debt it has owed for almost ten years.

Envelopes were distributed this week in the parish of ST Joseph’s in Mountmellick, Co Laois asking for a special contribution to help address the crippling debt which has hung over the parish since badly needed improvements were carried out in 2006.

In a flyer delivered to all homes in the area, parish priest Fr Michael Murphy wrote, “Our 10-year debt campaign is asking every parishioner to help pay off the debt. Please contribute what your means will allow. Every donation is important and contributions of €50-€100 will greatly support the campaign.”

Speaking about the project on local radio, Fr Murphy who became parish priest in 2012, confirmed that the original loan taken out for the restoration of the Mountmellick church was around €1 million.

He added “a significant sum has since been repaid but interest has accrued’”.

He suggested that, “other fundraisers will unfold” including the possible selling of land, houses and halls belonging to the parish.

The priest confirmed that the improvements in the church were to be paid for by a major building project in the parish which would have yielded €750,000 but never materialised due to the down turn.

“A major building project planned on parish land beside Smith Field would have raised €750,000 but never materialised,” he said.

Over €1 million is owed to both Mountmellick Credit Union and the Diocese of Kildare and Leighlin.

Both gave the loans in 2006 to Mountmellick parish for an extensive renovation and refurbishment of St Joseph’s Church, which included removing altar rails and extending the marble sanctuary.

Going forward the parish also hopes to raise money through the tax rebate scheme which requires a minimum charitable donation of €250 to allow for a tax refund.

It is also intended to improve the existing income streams for the church with a parish lotto and bingo.

Fr Murphy added, “People need the best possible facilities and services. Whether on a regular or occasional basis, parishioners expect to be able to avail of both of these. Providing them is the challenge every parish community in the country faces.”