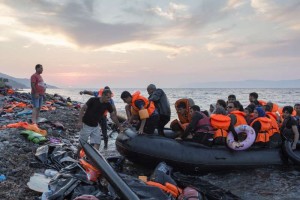 When the body of three year old Aylan Kurdi was washed up on a Turkish beach in September, the refugee crisis finally hit home according to Éamonn Meehan, Executive Director, Trócaire.

In his review of 2015 he stated, “Like many others, Trócaire had been trying to highlight this crisis for a long time. The Syrian war will mark its fifth anniversary in March 2016 – sadly, there is no sign of this crisis ending.”

“The world urgently needs to bring peace to Syria to stop the completely unacceptable suffering of the Syrian people.”

As of 21 December, some 972,500 had crossed the Mediterranean Sea according to UNHCR figures.

It was also estimated that over 34,000 have crossed from Turkey into Bulgaria and Greece by land. So over one million people arrived in Europe during 2015.

These people displaced by war and conflict is the highest number seen in Western and Central Europe since the 1990s, when several conflicts broke out in the former Yugoslavia. 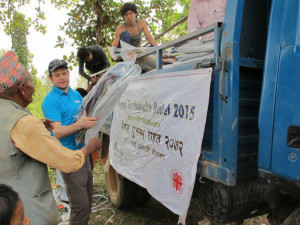 Trócaire’s Conor O’Loughlin helping the reflief efforts in Nepal after the devastating earthquake in April.

Éamonn Meehan also detailed how conflict displaced millions in Syria, but that earthquakes also forced people in Nepal and Pakistan from their homes.

Trócaire, with the donations of the Irish public, was present with support for some of the 220,000 people affected by the earthquake, and that work continues in Nepal on building permanent, earthquake-resistant houses for people there.

Other earthquakes took place in Afghanistan and Pakistan.

These earthquakes and the refugee crisis led to Trócaire issuing three humanitarian appeals in 2015.

However, 2015 will be remembered by many as a year “bookended” by terror in Paris, with the violence in January and again in November, and the year when anti-poverty and climate change goals and actions planned at global conferences will profoundly impact the lives of hundreds of millions of people around the world, stated Éamonn Meehan.

“While international summits don’t generally provide too many water cooler moments, 2015 saw three very important such gatherings,” he stated in his review of 2015.

“These summits – in Ethiopia and New York to set new anti-poverty goals and financial agreements to fund them, and later in Paris where the historic global agreement on climate change was agreed – all offered degrees of hope in a year that was so sadly tragic in many other ways.”

Trócaire launches humanitarian interventions to respond to sudden and urgent needs but long-term development work continues throughout the year. Much of this work is funded by the annual Lenten appeal, which this year focused on the impacts of climate change on farming communities in Ethiopia. 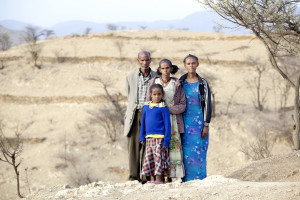 Mahlet and her family featured on the 2015 Trócaire Lent campaign

The advertisements focused on Mahlet and her family who, along with tens of millions of others across Africa, are finding it increasingly difficult to grow enough food due to changing weather patterns.

Trócaire’s climate conference in Maynooth with speakers Mary Robinson, Bill McKibben and Professor Jean Pascal Van Ypersele amongst others, was held at a time when Ireland’s Climate Change Bill was being drafted.

The  Bill passed through the Dáil giving Ireland its first ever legislation linked to climate change.

Around the same time the UN Climate Summit took place in Paris. In advance of the Summit, over 5,000 people took part in street demonstrations across Ireland organised by Trócaire and the Stop Climate Chaos coalition.

“When you consider that over recent months we have seen domestic legislation passed, an international agreement secured and huge public demonstrations calling for increased climate action, it is clear that this has been a very important year for the climate justice movement. Huge work remains over the years ahead but we now have solid building blocks to start this work,” stated Éamonn Meehan.

He concluded that  Trócaire’s supporters and campaigners will have an important role in continuing to push for climate justice.