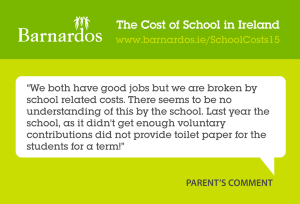 A mother worries day and night about which bills to postpone so she can pay for her two children’s ‘free’ education.

This is just one example given by Barnardos at the launch of its 10th School Costs Survey yesterday (4 August).

“It is very clear our education system is underfunded and under-resourced and there is an unfair expectation that parents will plug the gaps,” said Fergus Finlay, CEO, Barnardos.

“Barnardos has been speaking to parents for the past 10 years and they have consistently told us about the sacrifices they have to make to ensure their child has everything covered, including the right uniform, shoes, correct books, stationery and so-called voluntary contributions,” he said.

The Barnardos spokesman continued, “They have told us they have to forgo paying essential bills, drastically reduce spending on food and very many are forced to borrow heavily and get into debt,” he said.

Barnardos urged the Government to prioritise education in the next budget. The charity has calculated that €103.2 million would cover all the costs and deliver free primary education. 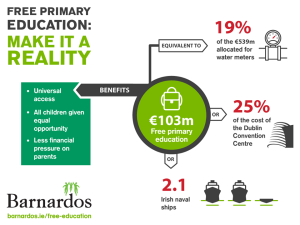 “The Government has no more excuses. For the first time in years, there is an expected surplus available in Budget 2016. What better way to spend it than invest in education – improving outcomes for our children, educating our future workforce and more immediately, relieving the annual financial pressure parents face every September,” said Fergus Finlay.

The survey of 1,400 parents showed that the big costs are uniforms, books and the so called ‘voluntary contribution’.

Barnardos and other charities have been appealing to successive governments to tackle this issue to no avail.

Tenth anniversary comparisons show that in 2005 it cost €250 to send the youngest child to school and €495 for secondary student. So costs have gone up. 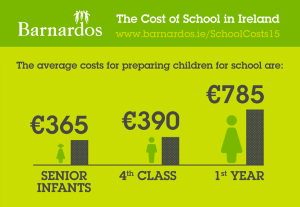 44% of parents of primary children and 53% of secondary have to juggle their household budget, postponing payment of bills or cutting back on daily expenses, in order to pay for school costs.

“We are hearing the same complaints; textbooks changes, new editions and the use of workbooks result in an inability to reuse books, adding to the bill. The refusal of many schools to adopt generic uniforms instead of crested items from specialised shops remains a bone of contention for many,” said June Tinsley, Head of Advocacy, Barnardos, listing the simple changes which could save parents substantial sums of money.

“While we are pleased to see parent pressure has had some impact over the years, for example the expansion of the school book rental schemes in primary schools and some schools reviewing their uniform policy, it is not nearly enough. Too many families are buckling under the pressure, which hurts parents and children.”

This contribution does not pay for extras such as school trips but has become part of the income required by the school to make ends meet.

One parent told Barnardos that their children’s school did not provide toilet paper far a term as it did not get enough voluntary contributions.

“We didn’t have money to buy food for a few days last year because of the contribution, even at that we couldn’t afford to pay it all. We got letters, texts and e-mails asking for the rest of the money for weeks after, we were afraid every day that our son was going to be singled out over it and we ended up selling some of our things to pay it off for fear that he would suffer over it,” stated another parent.