Home > News > Papal message of solidarity with those heavy burdened

Papal message of solidarity with those heavy burdened 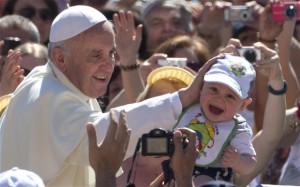 “Come together in the joy of faith” was Pope Francis’ invitation to the thousands of families gathered in Rome on Saturday evening to take part in a weekend Family Pilgrimage to the Tomb of St Peter.

Responding to the experiences and the stories of some of those present, the Pope said, “I have felt the pain of families living in situations of poverty and war.”

“I have listened to the young people who want to be married even though they face numerous difficulties. And so, let us ask ourselves: how is it possible to live the joy which comes from faith, in the family, today?”

As many of 150,000 people participated in the rally, which is part of a two-day celebration which will conclude on Sunday with Mass in St Peter’s Basilica presided over by Pope Francis.

Reflecting on a passage in the Gospel of Matthew in which Jesus says, ‘Come to me all who labour and are heavy laden, and I will give you rest’, the Pontiff acknowledged that life can often be wearisome.

“Work is tiring,” he said, “Looking for work is exhausting. But what is most burdensome in life is a lack of love. Without love, the burden becomes even heavier.”

On the elderly living alone and families who receive no help in caring for someone at home with special needs, the Pope said the Lord knows their struggles and burdens.

“He also knows our great desire to find joy and rest!” he added. 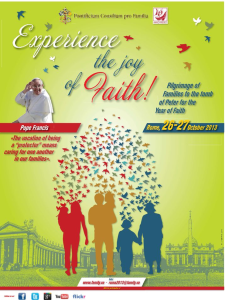 Reflecting on marriage, Pope Francis described it as life-long journey. “Setting out and walking together, hand in hand, putting yourselves in the Lord’s powerful hands”.

The Pope said that with trust in God’s faithfulness, everything can be faced responsibly and without fear.

He said that notwithstanding the many difficulties faced by spouses today, Christians are not afraid to be responsible, “they do not shirk the mission of forming a family and bringing children into the world”.

Commenting on an icon of Jesus’ Presentation in the Temple, Pope Francis noted that it depicts three generations that come together fulfilling a single design.

The elderly represent faith as memory; Mary and Joseph are the family, sanctified by the presence of Jesus who is the fulfilment of all God’s promises.

Like the Holy Family of Nazareth “every family is part of the history of a people; it cannot exist without the generations who have gone before it,” the Pope said.

Pope Francis concluded his address reassuring all families that they too, are a part of God’s people, and with the help of Christ’s grace, he urged them to live the joy of faith.