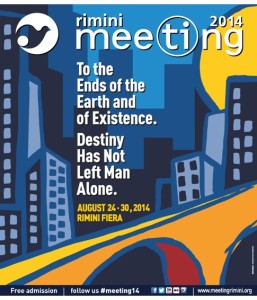 This year’s Meeting for Friendship among Peoples opens today in Rimini and continues until the end of the week.

On Saturday, the Vatican announced that Pope Francis sent a message to the organisers and participants of this year’s event which will see thousands of people descend on the Italian seaside town to explore their faith through the lens of culture, philosophy, politics and sport.

In a letter addressed to the Bishop of Rimini, the Vatican’s Secretary of State, Cardinal Pietro Parolin, conveyed Pope Francis’ best wishes and blessings for the Meeting.

The theme of this year’s gathering is ‘To the Ends of the Earth and of Existence. Destiny Has Not Left Man Alone.’

In the letter, Cardinal Parolin said Pope Francis was grateful that the leaders of the Meeting “have heard and spread his invitation” to go to the peripheries.

He noted that the second part of the theme comes from the Servant of God Don Luigi Giussani, who reminds us that “the Lord has not abandoned us, has not forgotten us.”

The Christian, Cardinal Parolin said, “is not afraid to decentralise, to go toward the peripheries, because he is centred on Jesus.”

Pope Francis has asked the leaders and participants in the Meeting to focus their attention on two particular points, according to the Secretary of State.

First, Pope Francis invites everyone “to never lose contact with reality; or rather, to be lovers of reality.” In a culture that gives pride of place to appearance, “the challenge is to choose and to love” what is real.

The second point is to always keep their gaze fixed on the essentials.

“The most serious problems arise when the Christian message comes to be identified with secondary aspects that do not express the heart of the proclamation” of the Gospel.

Cardinal Parolin said that the Holy Father “offers these reflections as a contribution to the week of the Meeting, to all the participants, and especially to the leaders, the organisers, the presenters who come from the peripheries of the world and of existence to testify that God the Father does not leave his children alone.”

The Pope hopes that many can relive the experience of the first disciples of Jesus, who, meeting Him on the bank of the Jordan, heard the question: ‘Whom do you seek?”

“May this question of Jesus always accompany the journey of those who come to the Meeting for Friendship among Peoples,” he said.

On Monday, one of the major discussions hosted by the Meeting looks at the issue – ‘Immigration and the Needs of others: Italy, Europe and the World.’