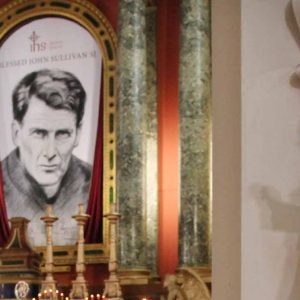 Thousands of people were present at a Mass at St Francis Xavier Church in Dublin on Saturday where the Jesuit priest Fr John Sullivan was declared blessed in a unique beatification ceremony.

Not only was this the first beatification ceremony to be held in Ireland, it was the first ecumenical celebration of its kind, reflecting the fact that Fr Sullivan, who lived between 1861 and 1933, was born and raised as a member of the Church of Ireland before converting to Catholicism and becoming a Catholic priest.

The Gardiner Street church was filled to over-flowing, with hundreds of people watching the proceedings via television in two marquee tents erected nearby to cope with the crowds.

Chief celebrant at the Mass was Cardinal Angelo Amato, prefect of the Congregation for the Causes of Saints, assisted by Archbishop Diarmuid Martin of Dublin, with concelebrants including Archbishops Eamon Martin and Kieran O’Reilly, Bishop James Moriarty, Jesuit Provincial Fr Leonard Moloney, the Jesuit General Counsellor for Discernment Fr John Dardis and many other Jesuit priests. Also present in the sanctuary of St Francis Xavier’s Church were two senior members of the Church of Ireland: Archbishop Michael Jackson of Dublin and Bishop John McDowell of Clogher.

After following his father Sir Edward Sullivan into the legal profession and becoming a barrister, at the age of 25 he surprised his friends and relations by converting to Catholicism, the tradition of his mother. Four years later, he joined the Jesuits and in 1907 he was ordained a priest, after which he quickly gained a reputation for serving the poor, the seriously ill and the dying and for obtaining miraculous healings through prayerful intercession.

In his homily on Saturday, Cardinal Amato quoted from the submissions made to his office in Rome, saying: “Witnesses in the diocesan processes often repeated that Father Sullivan was ‘a poor man among the poor’, ‘the personification of the spirit of poverty’. Even though he came from a rich family, once he became a religious he was oblivious to comforts and contented himself with that which was purely necessary. Faithful to the vow of poverty, he gave immediately to others every gift he received.”

Declaring Saturday to be a day of great joy, the Archbishop added: “We mark with the Jesuit Order in Ireland and worldwide, along with the Christian Church everywhere, the beatification in the Roman Catholic tradition of John Sullivan SJ. We do so mindful of the unending need for reconciliation in Ireland and expectant of the abundant grace of God.”

At the Mass, a large portrait of Blessed John Sullivan above the main altar in St Francis Xavier Church was unveiled and a relic of his hair was brought to the altar. Fr Sullivan’s remains are kept at the Gardiner Street church and, after the Mass, the faithful present were able to visit his shrine and touch his coffin. There were also long queues after the Mass as people waited patiently to receive a blessing made using the Fr John Sullivan cross.

Celebrations continue next Saturday 20 May, when a Mass of Thanksgiving will be celebrated in Clongowes Wood College in Clane, Co Kildare, at 7 pm.