Leaders of Ordinariates meet in Rome

The leaders of the three ordinariates (Anglican groups who have joined the Roman Catholic Church) met together in Rome for the first time ever this week.

The meetings of the leaders from the English, American and Australian *Ordinatiates came as the Church of England’s governing body moved a step closer to appointing women bishops, an issue which has been a major stumbling block to hopes of achieving unity between the Anglican and Roman Catholic Churches.

“Each ordinariate is different, but we share a common goal and a lot of the challenges we face are common ones, so this was a good opportunity to meet and discuss where we all are and how we might help each other and learn from each other’s experiences in the future,” Mgr Keith Newton, Ordinary of the Personal Ordinariate of Our Lady of Walsingham in England, said.

“The idea is that we should meet perhaps once a year from now on”, he added.

While in Rome, they visited senior officials in both the Roman Catholic and Anglican churches.

They saw the Prefect of the Congregation for the Doctrine of the Faith, Cardinal-designate Gerhard Müller and other officials, to report on how the ordinariates are getting on. 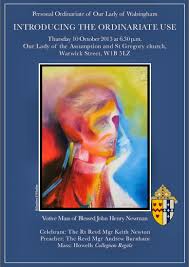 They also had meetings at the Pontifical Council for Promoting Christian Unity and with Archbishop David Moxon, director of the Anglican Centre in Rome and co-chairman of the Anglican-Roman Catholic International Commission (ARCIC).

The Personal Ordinariate of Our Lady of Walsingham was set up by Benedict XVI in 2011 in response to requests from Anglicans who felt that the Anglican Church was moving further away from making unity with the Catholic Church possible.

More than 80 former Anglican clergy have since been ordained as Catholic priests under its jurisdiction and there are some 40 Ordinariate groups around the UK.

The three men were to serve as priests in the Personal Ordinariate for England and Wales, the first structure of its kind to be established by Pope Benedict XVI in the Apostolic Constitution “Anglicanorum Coetibus”.

The ordinariates in the United States and Australia followed it in 2012.

*Structures set up to allow former Anglican clergy and lay people to enter the full communion of the Catholic Church, bringing with them much of their Anglican heritage.