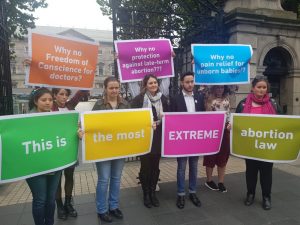 Legislation introducing medical abortion in Ireland currently being discussed by the Oireachtas does not respect freedom of conscience, according to the Catholic bishops of Ireland.

The bishops released a statement yesterday, saying it was unfair that the draft legislation provides for doctors and nurses to opt out of providing abortion, but requires that in such cases, they refer the patient to a colleague who will perform the procedure.

“This requirement may have the appearance of respecting freedom of conscience but, in reality, it requires a healthcare professional to cooperate in what he or she sincerely believes is doing harm to one patient and taking the life of another,” the bishops said.

The Health (Regulation of Termination of Pregnancy) Bill 2018 proposes to make abortion widely available in Ireland within the coming months. The draft legislation envisages that, in the first 12 weeks, abortion generally will be drug induced, wrote the bishops. “This presumes that pharmacists, whether in hospitals or in private practice, will routinely stock and dispense drugs whose specific purpose is to end human life. No provision is made for pharmacists to opt out on the grounds of conscientious objection.”

The bishops recommended the system that exists in New Zealand, where healthcare professionals opt in to the provision of abortion if they wish, and where there is no obligation on them to refer patients to others for abortion. They asked the Government and wider society to respect the right of all healthcare professionals and pharmacists to exercise conscientious objection “not only by refusing to participate actively in abortion but also by declining to refer their patients to others for abortion”.

On Thursday, as the bill was being debated in Dáil Eireann, members of the Pro Life Campaign demonstrated outside parliament. “The bill being introduced to the Oireachtas today is by far and away the most unjust and inhumane bill ever to come before the Dáil,” said Eilish Mulroy from the Pro Life Campaign. She said the public had voted to repeal the Eighth Amendment, but they had not voted in favour of the “extreme and inhumane proposal” now being put forward by the Government.

“[This is] legislation that doesn’t even provide pain relief for unborn babies during late-term abortions, and that compels doctors to abandon their medical training to protect life and instead facilitate abortions or run the risk of being struck off the medical register,” Ms Mulroy said.

Meanwhile the Life Institute has called on the public, “as a matter of urgency to visit, call and email your TD seeking amendments to the legislation”. The amendments the institute is recommending are:

Meanwhile the Pro Life Campaign is holding its national conference today, 6 October, in the RDS Concert Hall, Dublin 4, from 1pm–4.30pm. Kristan Hawkins, president of Students for Life of America will be the keynote speaker at the event, which has as its theme “Next Steps: facing the new landscape positively and creatively”.