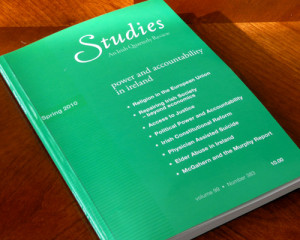 There are families in Ireland who have never had a home cooked meal together according to Ombudsman, Emily O’Reilly.

She has written about the plight of asylum seekers and their families in direct provision in Ireland for the latest issue of the Jesuit quarterly, Studies.

“My overall thesis reflects my concern that, in terms of our treatment of families and children, we may well be breaching not just our own constitution but international human rights conventions as well,” the newly appointed and first woman European Ombudsman said on Tuesday.

She was speaking at the launch of the latest edition of Studies, which contains her keynote article, ‘Asylum Seekers in Our Republic: Why Have We Gone Wrong?’

Her article focused on a case her office investigated concerning a woman asylum seeker and her two children. According to Emily O’Reilly the failure of state agencies to uphold the rights of the mother almost sundered the family apart.

“If the same thing had happened to an Irish citizen family, the scandal would have been of immense proportions; as it was, the publication of my report raised barely a ripple,” she said.

She criticised what she called the “casual indifference and ignorance” of Irish society in ignoring the unacceptable length of time that asylum seekers here spend in direct provision.

There is an urgent need to speed up and streamline the asylum seeking process, the Ombudsman warned.

The case which she highlights in the Studies article involved an African woman with two children who came to Ireland in 2007.

Despite being entitled to Supplementary Welfare Allowance (SWA) she never received it and her child went to foster care while she ended back in DP – she has been unable keep her family together.

In the course of investigating this complaint, Emily O’Reilly looked more generally at Irish arrangements for asylum seekers.

“I was struck immediately by the almost universal acceptance that these arrangements are damaging to the health, welfare and life-chances of those who must endure them. I found myself facing the difficult question of how we, as a society, have allowed these very unacceptable arrangements to develop and continue in place for more than a decade.”

“I wondered whether these arrangements represent the will of the citizens of this State; whether they were introduced with the full knowledge and full consent of our legislature; and whether they are at odds with our status as a republic and with our self-image as a fair and caring society which respects the rule of law both nationally and internationally,” she writes in her article.

Eugene Quinn, National Director of the Jesuit Refugee Centre in Ireland, who also spoke at the launch, called on the Irish Government to urgently reform the current asylum system, which is leaving thousands of asylum seekers living in limbo for prolonged periods in direct provision accommodation.

“One in three asylum seekers have been waiting at least five years and one in ten more than seven years for a final decision on their application for protection by the Irish State. Their lives have been put on hold; they have not committed a crime, but many endure what they feel is an indefinite sentence in direct provision,” he said.

Mr Quinn drew attention to the fact that when direct provision was introduced in 2000, it was envisaged that people would remain within the system on a short-term basis – no longer than six months.

The immediate as well as the long-term impact on children growing up in the institutionalised environment of direct provision must be an issue of grave concern he said.

“States do, of course, have a right to control their borders,” he acknowledged but added that when the decision on asylum is delayed, “It can become a cruel and inhumane system.”

Earlier this week Pope Francis, on his first pastoral visit outside of Rome, went to the barren island of Lampedusa which is situated between Africa and Italy. Here a dozen migrants lost their lives in a deadly crossing earlier this year.

Pope Francis denounced the “globalisation of indifference” that greets migrants who risk their lives to reach Europe.

The Pope greeted newly arrived migrants, and during Mass on the island’s sports field, thanked the residents for welcoming so many men and women over the years. He prayed for those who died trying to make a better life for themselves and their families.

“Who wept for these people who were aboard the boat?” Francis asked in his homily. “For the young mothers who brought their babies? For these men who wanted to support their families?”

The Pontiff added, “We are a society that has forgotten how to cry,” and he challenged everyone to take responsibility for the migrants’ desperation, urging them not to have “anaesthesia of the heart.”