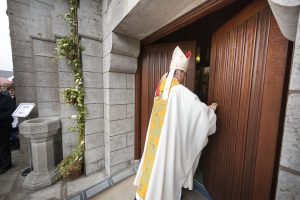 Over four hundred pilgrims crossed the ‘Threshold of Mercy’ in Lough Derg last Sunday, a place described by Pope Francis’ representative in Ireland as “a holy island” and an “ancient and renowned place of pilgrimage”.

The Holy Door of Mercy will remain open for the duration of the 2016 Lough Derg pilgrimage season.

In his homily, the Nuncio told the assembled pilgrims that they were gathered together in “a place hallowed by the countless generations before us who have come here to pray and do penance.”

He said they had come to Lough Derg “to rejoice in God’s gift of mercy”.

Referring to Lough Derg’s reputation as a holy place of pilgrimage and penance, Archbishop Brown considered what penance is. 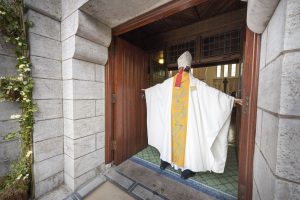 That is why Pope Francis stressed that the Church is not like a tollbooth. It is not in any sense a place where you have to pay to have the barrier lifted.

“Penance is not our payment to the toll-collector, but rather the expression of joy and gratitude for the mercy we have received, and that is why there are few places in the entire world that are as permeated and suffused with the atmosphere of mercy as is Lough Derg. Here our feet are standing on an island of mercy,” the Nuncio said.

But he underlined that the Church needs to have her doors open to receive and he contrasted the Church’s willingness to embrace all who enter to the modern world, which likes to create barriers.

“In America, they speak of ‘gated communities’, enclosures in which affluent people can feel safe. Modern man has even managed to invent a way to move people in and out of closed buildings without ever opening a door. Think about it. That is what a revolving door does. It is never actually open, and yet we are able to enter,” Dr Brown highlighted.

He added that the Church isn’t like that. “Her doors of mercy are simply open, inviting us to stream in, to be healed, and to rejoice in God’s mercy.”

He added that all this rich symbolism of the opening of doors is meant to teach us that God’s mercy in Jesus is infinite.

“There are no sins which cannot be forgiven by God.  So we pray that many, many pilgrims will come to Lough Derg in this Holy Year to breathe this atmosphere of mercy and to pass through the Holy Door of Mercy with their sins forgiven,” he said.

But he warned that the reception of God’s mercy in this Holy Year is not meant solely for us; mercy should not lie fallow in our hearts.

“Jesus warns us in the Gospels about the man who received mercy from his employer and yet then was utterly unmerciful in his treatment of a fellow worker, and tells us ‘This is how my heavenly Father will treat each of you unless you forgive your brother from your heart’ (Mt 18:21-35). Let it not be said of us that we were stingy or miserly in showing mercy to others.” 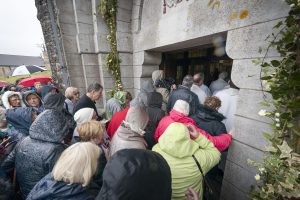 Over four hundred pilgrims crossed the ‘Threshold of Mercy’ in Lough Derg.

He urged the pilgrims as they left Lough Derg and returned to their normal everyday lives, to strive to practice the corporal and spiritual works of mercy in regard to those we meet in the world.

St Patrick’s Sanctuary – the pilgrimage site – is located on Station island in Lough Derg which is four miles north of the village of Pettigo, Co Donegal.

It is often referred to as Saint Patrick’s Purgatory or simply Lough Derg. The Diocese of Clogher has been the sole custodian of Lough Derg since 1780.

Historical records date the practice of pilgrimage here to the 7th Century. Legend also presents the cave on the island as the place where St Patrick had his vision of Purgatory.

St Patrick is said to have left a disciple in the area and the foundation of one of the earliest monastic Christian settlements followed.

The remnants of the monastic prayer cells remain central to the pilgrimage tradition.

Today, the Lough Derg Three Day Pilgrimage follows a pattern prayer from the Celtic monastic time and shows remarkable continuity with the earliest systematic account of the pilgrimage, which dates to the 1600s.

Before this, several accounts of pilgrimage to Lough Derg survive from medieval times.

A 1346 Purgatory fresco on the wall of a convent church in Todi depicts St Patrick, and witnesses the fame of Lough Derg in continental Europe at that period.

The Lough Derg pilgrimage continued through the religious persecution of post Reformation times.  A detailed account survives in the 1714 Relatio Status of Bishop Hugh MacMahon.

The island pilgrimage is currently overseen by the Prior, Father Owen McEneaney, a priest of the Diocese of Clogher.  See www.loughderg.org