Home > News > Number of Schoolchildren Getting Drunk Down Slightly

Number of Schoolchildren Getting Drunk Down Slightly 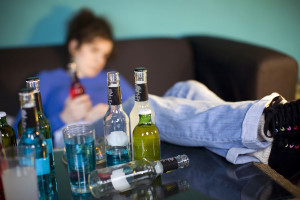 A new report has shown that though the number of schoolchildren smoking has dropped significantly, the number getting drunk has declined only slightly.

The report findings were published just ahead of ‘Arthur’s Day’ on Thursday, an event organised by Diageo to celebrate the anniversary of the Guinness brewing company.

One of the speakers at the talk was liver disease specialist, Dr Stephen Stewart, who warned that he is treating patients in their 30s with end-stage liver disease who were unaware they have a drinking problem.

Speaking to the Irish Independent, Dr Stewart said Ireland had “a progressively worsening relationship with alcohol”. He said this was apparent in the increasing numbers of young people dying from alcohol-related illnesses. “We need measures to address this epidemic. Where does Arthur’s Day fit into all of this?” he asked.

Separately, Dublin will host a major international conference on addiction and spirituality this weekend.

Peter McVerry SJ, Denis Bradley (former vice-chair of the NI Policing board) and US author Jim Harbaugh SJ are among the speakers at the conference which will look at the role of spirituality and faith in addiction recovery.

The conference, which is organised by the Pioneer Association, takes place in All Hallows College in Drumcondra on Saturday 28 and Sunday 29 September. Archbishop Diarmuid Martin will attend and speak on Sunday.

The conference takes place against the background of newly released figures from the CSO showing that in 2012 Irish people spent €6.3 billion on alcohol, a 1.2% increase on 2011.

Guest speaker Fr Jim Harbaugh SJ is a recovering alcoholic, AA an Al-Anon member. He has written and lectured on the role of 12-Step spirituality in the treatment of addiction.

Fr Peter McVerry will explain why he’s decided to abstain from alcohol as a stand against the havoc unleashed in Irish society by drug and alcohol abuse.

Majella Coyle, a recovering addict now working as an addiction counsellor in Donegal will also address the conference about both her story of struggling with addiction right through to her powerful recovery. Her sister will share the podium with her reflecting on how addiction affects families.

She will also share some of the insights of the 12 step programmes. She will outline the powerful role 12 step groups around the world play in helping family members recover from the effects of the disease of alcoholism.

Patricia Gallagher is a young Pioneer who works in youth outreach and she will talk of her own experience of abstaining from alcohol as a spiritual practice and the problem of alcohol abuse among young people today.

Fr Barney Mc Guckian SJ will address the spirituality of the Pioneer movement addressing the question of how abstaining from drink can make a meaningful difference in a society torn apart by addiction.

Denis Bradley who founded Northlands Rehabilitation Centre in Derry will talk about developing a credible spirituality to deal with the addiction endemic in 21st century Ireland.

The conference is open to anyone from at home or abroad concerned about the issue of addiction and how to address it, especially but not exclusively, from a faith or spiritual perspective. The conference is part of ‘The Gathering Ireland’ activities for 2013.

Over one hundred and thirty people have confirmed they will attend but there are still spaces for people to come on a daily or per lecture basis.