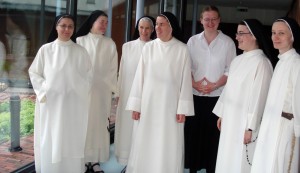 New figures released by the Church show the number of nuns around the world has continued to drop.

The December 2012 edition of the Church’s statistical annual shows that the total number of nuns is down 10,677 to 702,529 worldwide with Europe accounting for the major share of the drop, having lost 9,051 religious women.

Meanwhile, a new report, ‘Population Trends Among Religious Institutes of Women’ by Mary L. Gautier and Mark M. Gray of CARA, and Erick Berrelleza, a Jesuit scholastic at Boston College, explains that the church has to go back to the early years of the 20th century for a comparable figure of religious women to today.

The CARA report found that as their numbers declined, some religious orders have reorganised their internal structures, while others merged with other religious institutes.

Some have been boosted by Sisters joining from other countries or late vocations. More drastically, some orders have stopped ministering in the US.

“In the face of diminishment,” the report said, “women religious have innovated by responding with new models when old models proved ineffective.”

The report also challenges some of the assumptions made in recent years about the growth in women’s religious vocations coming primarily in orders that are ‘traditionalist’ and wear a full religious habit.

This view claims that these orders have accounted for the major number of vocations while institutes whose members do not wear a habit are declining.

The report shows that the Leadership Conference of Women Religious (LCWR) orders, which account for about 80 percent of the country’s women religious, had among them 73 postulants, 117 novices and 317 women who had taken temporary vows in 2009.

The CMSWR orders, which tend to be more traditionalist, had about the same number of women in formation as the LCWR institutes – 73 postulants, 158 novices and 304 who had taken temporary vows.