Home > Featured > Do not be afraid to proclaim your faith: Archbishop Brown

Do not be afraid to proclaim your faith: Archbishop Brown 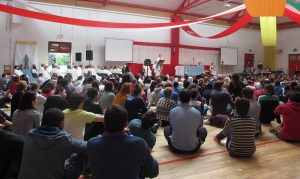 “We need young people to speak our faith. The Church is built upon young people,”  Archbishop Charles Brown told around a thousand young people at the concluding mass of this year’s Youth 2000 Summer Festival on Sunday.

Referring to the Gospel passage where Jesus says everything hidden will be revealed, Archbishop Brown said the Lord was working secret miracles in the hearts of the young people at the Roscrea festival.

“What is now happening will one day be revealed to you, but God is working miracles now in your heart, so pray for those miracles, open your  hearts to that secret truth.”

What is the ‘secret truth’? he asked.  “The secret is that He loves you with an infinite love, you are precious in his eyes. Every aspect of your personality is known by Jesus and he comes close to you in this period of reflection to reveal this love to you.” 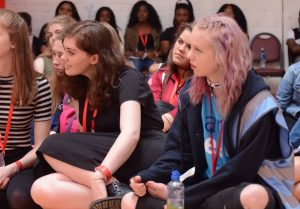 Faith too has an element of secrecy, the papal nuncio explained.  “Faith  is believing in something that we can’t see, something not totally verifiable.” Think of how many people saw Jesus walking the streets of Nazareth,  he said,  and  didn’t see anything special at all.

People in Ireland are the same, often passing by churches thinking it is just “another building”, a”human organisation has ceremonies in there”.  “They don’t see the truth, the secret truth, that in the church Jesus is present.”

Many are like this, but then at a certain moment (maybe at a Y2K retreat for example), people see in a different way, “with the eyes of faith”.  “There is an amazing thing happening at every Mass. The crucifixion of Jesus is re-presented at Mass.  His body and blood here to feed support and help us.”

Quoting the Gospel passage “Do not be afraid of those who kill the body but cannot kill the soul,” Archbishop Brown said that everyone had fears.  “Fears of the present, fears of the future – what am I going to do?  Fears at school, fears of offending our friends and all those things and Jesus says to us ‘Dont’ be afraid. I have conquered everything’.” 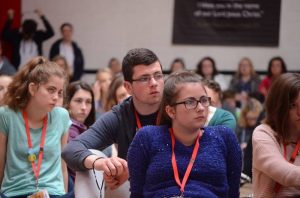 He continued “We need young people to speak our faith.  The Church is built upon young people.”

He then placed before them three young people who had done this – Therese of the Child Jesus who entered a convent when she was 13 years old; the 17 year old St Joan of Arc who led the French forces in battle and Charles de Foucauld  who as a young man lived “a completely debauched life, filling his life with all the things that he thought would make him happy but actually made him miserable”. 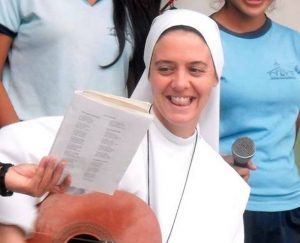 Charles de Foucauld’s cousin noting how unhappy he was suggested he speak to a priest to find out about the Catholic religion, but instead the priest  (who was hearing confessions) told Charles to kneel down and make his confession  and “he rose up a different man”. Charles de Foucauld ultimately became a Trappist monk and died in North Africa as a hermit taking care of the poor and abandoned, murdered by marauders.

Finally Archbishop Brown recommended Sister Clare Crockett to the young people.  Sr Clare, a beautiful girl from Derry died in an earthquake in Equador in April this year.  “Look at the  Youtube video of her life. She is an example to be followed and perhaps a saint to be prayed to.”

He urged the young people to declare themselves for Jesus. “Follow him and don’t be afraid because everything is  in God’s hands and nothing is impossible with God.”