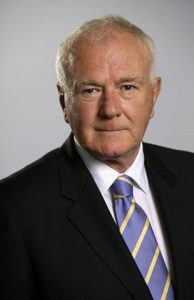 A prominent member of the Orange Order in Northern Ireland has called for an end to the Order’s ban on members attending Catholic Mass.

David McNarry, who is the UKIP leader in Northern Ireland, also said he believed the institution’s chaplains could initiate a discussion about changing the traditional rule. The past Assistant Grand Master of the Grand Lodge of Ireland also admitted he had been present at Requiem Mass at the funerals of friends.

Mr McNarry argued that Orange Order members did not break the ban if they did not participate in a Mass. He was referring to the instruction in the Order’s rule book that “you should not countenance by your presence or otherwise any act or ceremony of Popish worship.”

Mr McNarry told the Belfast Telegraph that: “In its own time the institution should promote a discussion. It may come about from the Grand chaplains perhaps preparing a review if they so wish, and it is a worthy subject for a discussion. All Orangemen are aware of the rule. I don’t know how anyone breaks that rule if they enter a Roman Catholic chapel and Mass is going on and you don’t participate in it. In fact, most Orangemen would not know how to participate in it.”

He continued: “If, as occasions have arisen, and you are doing it as part of your civic duties, or it is the close relation of a son or daughter or a friend, or someone serving in the Armed Forces, or someone you have known for a long time, you do the natural thing and go to pay your respects.”

The ex-Strangford MLA, who was a senior Ulster Unionist for many years, added: “I have always felt this way. I have gone on three occasions when I felt that I wanted to pay my respects by going to a friend’s funeral.”

Meanwhile, Sinn Féin has praised the Orange Order for organising a conference in Enniskillen in County Fermanagh on the 1916 Rising. Declan Kearney MLA, the party’s national chairman, and Sean Lynch MLA attended the Understanding 1916 – Easter Rising discussion in Enniskillen on Thursday. It was jointly organised by the local Orange Order, the Church of Ireland and local Presbyterians and Methodists.

Speaking after the event, Mr Kearney said: “I congratulate the Orange Order and the Protestant section of our community in Fermanagh for organising this discussion on the Easter Rising. I fully agree with the comments of the Grand Master, Stuart Booker, when he emphasised that such initiatives should not be about agreeing or disagreeing on our history, but about developing greater understanding through listening and speaking.” He added, “I said in my own contribution from the floor that it is quite valid for us as a society to agree to disagree, but that willingness to engage with each other on the basis of equality must be paramount. Engagement about our differences increases mutual understanding, and that builds national respect.”