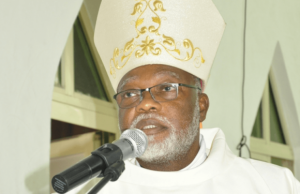 A Nigerian bishop has warned of possible genocide in his country in the face of increasing  violence against Nigerian Christians.

Bishop William Amove Avenya of Gboko, Nigeria, pleaded with the West to take notice of the attacks on Christians by Fulani tribesmen, which he said could soon become a genocidal campaign.

“Please don’t make the same mistake as was made with the genocide in Rwanda,” he said.

Speaking to Aid to the Church in Need, the Bishop observed that age-old tribal conflicts have been aggravated by religious tensions and a recent flood of powerful weapons into the region.

In recent days there have been new attacks in the area of Jos, the capital of Plateau State, which left 100 people dead.

The Fulani people have herded their flocks in parts of Nigeria’s Middle Belt for centuries. Clashes between the herdsmen and local farmers, the majority of whom are Christians, and whose crops have often been trampled on and even destroyed by the herdsmen’s flocks, are not uncommon.

In the past, these conflicts were generally either tribal in nature or driven by economics; today they appear to be religiously motivated.

According to official data, there have been 492 victims since the beginning of the year in Benue State alone.

“They are criminals and terrorists, but they do not do the same things in the majority Muslim areas,” Bishop Avenya said and added: “We are convinced that what is happening is an ethnic cleansing of Christians.”

Some observers have criticised the police over their inaction to resolve the issue and have even suggested that the police have armed the Fulani herdsmen.

“At one time these pastoralists were armed only with sticks,” Bishop Avenya said. “But now they are armed with AK-47s, expensive weapons that they could not possibly afford. So who is supplying them? And besides, in these areas there are checkpoints every mile-and-a-half. Is it possible that armed men and their flocks of cattle could have somehow become invisible?”

Bishop Peter Iornzuul Adoboh of Katsina Ala Diocese (Benue State) and Bishop Matthew Ishaya Audu of Lafia diocese (Nassarawa State) believe that there is a “clear agenda of Islamising the Nigerian Middle Belt,” a plan that is making use of the Fulani herdsmen.

“Their aim is to strike at the Christians,” explained Bishop Audu, “and the government is doing nothing to stop them, because President Buhari himself is a member of the Fulani tribe.”