Home > News > NI is still not a society at peace with itself: Bishop

NI is still not a society at peace with itself: Bishop 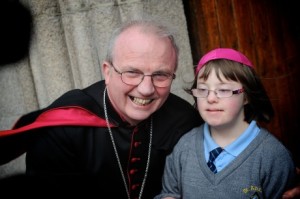 Northern Ireland is still a place where “confrontation rather than conciliation is the name of the game” Bishop Donal McKeown has said.

In his homily for the solemn reopening of St Mary’s Church, Coolcalm in Desertmartin, and the Mass of dedication of the new altar, the Bishop of Derry said “political attempts to deal with the past and with how we celebrate it have failed to deliver much progress.”

Referring to the twentieth anniversary of the signing of the 1994 ceasefire in Northern Ireland, he stated, “We are still not a society at peace with itself.”

In the Bishop’s opinion, leaving aside the suffering caused by the economic crisis and the fact that poor always suffer most, confrontation is still the name of the game.

Bishop McKeown said it would be easy for regular churchgoers to stand on the sidelines and criticise others.

But he posed the question – “what might ‘taking up the cross’ mean for people of faith in 2014?”

“If Jesus broke down barriers between Jew and Gentile, between the religious leaders and the sinners, what would he be asking all our churches to do in order to ease the pain of those who suffer most?” the leader of the Catholic Church in Derry asked.

“While there have been many great people of faith who said and did generous things, I believe that there is a lot more than our church leaders and church communities could do to ease the itch rather than just scratch it.”

“Are those who go to church regularly and pray at the forefront of seeking to build bridges and deal with the hurts? I am not talking about building church unity or prayer together.”

He explained that there is the cross of dealing with local contentious issues and the risk of getting mocked or criticised for trying that.

“Whatever our political agenda may be, people of faith are called to give priority to healing and reconciliation,” he stated.

Congratulating the community in St Mary’s Church, Coolcalm on their “beautiful bright church”, the Bishop said it was worthy of both the dignity of God and the long history of faith in the area.

Over recent months it has undergone: the replacement of the temporary altar with a marble altar taken from the Convent of Mercy in Buncrana (Co Donegal, Derry Diocese); the development of a new sanctuary and internal redecoration; the building of a new porch.

Bishop McKeown said the huge amount of work this entailed was a tribute to the parish’s sense of community and confidence in the future.

Referring to some of the current debates in the Church, the Bishop said that some people suggest that, “if only we had married priests or the ordination of women, then we could potter along as usual.”

He responded to this by stating, “I believe that the Pope is calling us to a much more in-depth review of how we are church, whether in Rome or in Desertmartin.”

“We will grow as a church only if we remember that we are all disciples, learners at the feet of Jesus, rather than fully formed believers.”

He noted that Jesus was very hard on any form of religious superiority on the part of the Pharisees in any generation.

“We have made many mistakes in the past. We need to learn from them rather than pretend that they did not happen. We have to recognise the plank in our own eyes before we try to help others to see,” he said.

He also stated that “Pride – or some notion that we know better than God – is a dangerous blockage to growth in the church.”

“The Church is the Body of Christ; it belongs to God and not to us. Our task is to seek what God wants for his people – and never to be blinded merely by what would suit us,” he commented.

Discussing the impact of Pope Francis, Bishop McKeown said “What really strikes me about him is not so much the cheerfulness simplicity of his style, as the fact what we all thought was a cynical and selfish world has responded so positively to him.”

“Despite almost drowning in everything from brutality to rubbish, very many people still yearn for idealism and for beauty. Even though our adult society keeps telling them that all that they can hope for is fun and lack of responsibility, many young people still want to believe that they are capable of great things.”

Paying tribute to Irish missionaries, he said they are renowned around the globe for their huge generosity and commitment.

However, he regretted that “if you go to those countries now and as often as not, the young Irish will be known as much for their misbehaviour as for their service of the poor.”

“Can we develop faith communities where the message of generosity, service and love will proclaimed as the ideal over and above the voices that scream, Obey your thirst; Don’t cook, just eat; You’re worth it?” he asked.

In a world which tells them that beauty is skin deep and that everything is of passing importance, can we help them to measure themselves against what they value, rather than just valuing what other people can measure?

In a world where too many people are dying for want of a reason for living, can we show them that life is not full of sound and fury, signifying nothing – as Hamlet says? (Hamlet, Act v, Sc v).

Recalling to the ordination of Fr Sean McGuigan in the parish earlier this year, Bishop McKeown urged the parish to remain a place of prayer and adoration, a place of welcome and celebration.