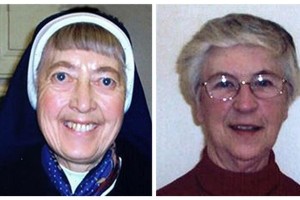 A school in Northern Ireland has remembered two nuns who were tragically killed in a car crash in September 2014.

Mercy nuns, Sr Frances Forde and Sr Marie Duddy, died when their car collided with an unmarked PSNI vehicle on the A1 carriageway close to Newry in Co Down.

The nuns, who were based at Ballysillan House on the Crumlin Road in Belfast, had been making their way to a religious retreat at Dromantine Retreat and Conference Centre in Newry when the crash happened,

Speaking afterwards Fr Forde praised the nuns for their new garden and thanked them on behalf of the Forde family.

Sr Frances was the former Principal of Mercy Primary School and following her retirement from teaching she continued to work for the Holycross Parish in North Belfast.

Sr Marie taught in Our Lady of Mercy College Ballysillan as well as in Africa and Queen’s University Belfast School of Education.

The nuns’ huge contribution to education in Belfast was acknowledged from both sides of the community.

Speaking on behalf of Bishop Noel Treanor, Down and Connor diocesan spokesman Fr Eddie Magee said, “Over the years, both sisters have blessed the diocese with ministries ranging from healthcare and education to spiritual guidance and cross community dialogue.”

Rev Norman Hamilton, former minister of Ballysillan Presbyterian Church said, “I knew them as two gracious, warm-hearted ladies, who were always concerned for the welfare of other people, no matter who they were,” he said.

“You would meet them in the street, or you’d meet them at the door and they were smiling. To lose two friends, so suddenly like this, is a genuine shock to me.”