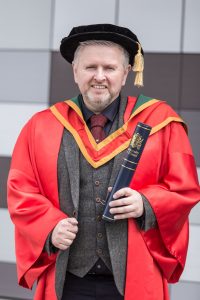 A priest present at the blockade of Holy Cross Girls’ School in 2001, who has received death threats and who played a role in peace negotiations, has received an honorary degree from Ulster University.

Passionist priest Fr Gary Donegan received the honorary degree of Doctor of Laws (LLD) for his outstanding community work in Northern Ireland. He said he was both “honoured” and “shocked”.

Speaking at the ceremony, he said that his life was transformed by events, as he had just arrived in Ardoyne when he and Fr Aidan Troy were thrust into the Holy Cross Girls’ School blockade, which became an international news story.

He was 26 years ordained and had no experience in Northern Ireland. He recalled:
“My eyes were then opened to the enormity of the task of reconciling a divided community which from that moment became my life’s work.”

He acknowledged all those who have sacrificed so much for the work of peace and teaching people how to “love rather than hate”, and who have taken risks for peace and will never be recognised or thanked publicly.

He said that more work than ever needs to be done in the light of recent events. In particular, communities in the Ardoyne and the Shankill, who have suffered the most, have benefited least from the so-called peace dividend.

“Our mission is to continue to present alternatives and the ultimate alternative is hope,” he said.

He was just one of 13 individuals working across sport, the arts, the economy, engineering, peace building and the community who were honoured by the University at its 2017 summer graduations on 3 and 4 July.

“Each of these recipients has made an indelible mark in their field, advancing knowledge, building community, achieving excellence and above all acting as inspirational role models for us all,” said Professor Paddy Nixon, vice-chancellor, Ulster University. “They display leadership, progressive thinking, compassion, bravery, integrity and tenacity alongside superlative skills and talent – characteristics that we aim to instil in all our students.”

Fr Donegan, who was at Ardoyne’s Holy Cross Church, Belfast for 15 years, recently began working at Tobar Mhuire Retreat Centre in Crossgar. However, he continues his community work in Ardoyne.

Last year he spoke of the dangers he faced daily (see CatholicIreland.net 23 April 2016). As well as being rector when parents and children of Holy Cross Girls’ School had to walk the gauntlet of protesters each morning, he was in Ardoyne during a spate of suicides in which 13 teenagers took their own lives in a six-week period in 2004. 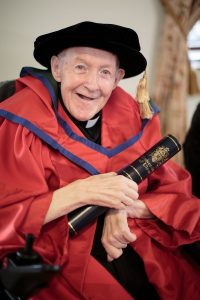 He has been an intermediary between dissidents and authorities, and often between opposing communities. Earlier this year he was jostled and heckled by Loyalists after a parade, and he has often received threats.

He has stated that at times he has a bullet proof vest with him and that danger is “a reality of the nature of the work that I do”. However, he added, as he has said before: “The reality is I work where I work, I take the risks that I take – but I’m not Dougal out of ‘Fr Ted’, I don’t do daft things.”

Also conferred with an honorary doctorate was a Derry priest recognised for his “lifelong dedication to the promotion and teaching of the Irish language.”

Fr Coyle was born in the Waterside area of Derry in 1940, and studied languages at Queen’s University. He is fluent in a number of languages and has published a number of landmark books on the Irish language. He received many tributes from the university staff, his former teaching colleagues and pupils from St Patrick’s in Dungannon and among the wider Irish language community.