Passionist priest says danger is part of his job 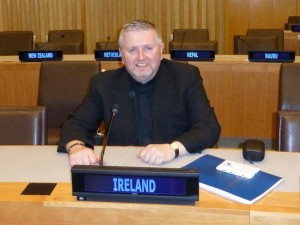 A Passionist priest who works as an intermediary in the Ardoyne area of Belfast has admitted that these days he carries a bullet proof vest with him.

He said danger is “a reality of the nature of the work that I do”.

His comments follow the killing of 33-year-old taxi driver Michael McGibbon in a so-called ‘punishment shooting’ in Belfast last week.

Another man in his 20s was shot in Co Derry on Monday night. He suffered two wounds to his legs and is said to be in a critical condition in hospital.

The parish of Ardoyne suffered the highest number of deaths during the Troubles in Northern Ireland.

Ninety-nine people lost their lives and Fr Donegan’s work at the interface over the last number of years has become an integral part of the local community.

His work made headlines across the world three years ago when a statue of Our Lady, which had been put at the top of a 12th of July Belfast bonfire, was handed back to him by Shankill Road community workers.

Speaking at the time Fr Donegan said, “We deeply appreciated that gesture. The statue is now repaired and we’re calling it Our Lady of Grace because that was a graced moment.”

Speaking with Pat Kenny on Newstalk Radio about the current situation in Belfast, Fr Donegan said he has helped to ‘commute’ sentences for other people in the area.

“I got a death threat lifted off a young man who had cancer, but he has an addiction issue as well. He’s on morphine and he’s mixing and he ran foul of these guys,” he said.

“Sometimes in situations they need an intermediary or something out there, so they need me – obviously I don’t need them – and only eight weeks ago I received a black eye from one of them for challenging them.”

“The reality is I work where I work, I take the risks that I take – but I’m not Dougal out of ‘Fr Ted’, I don’t do daft things.”

He added, “At the end of the day you either choose to be there or not.”