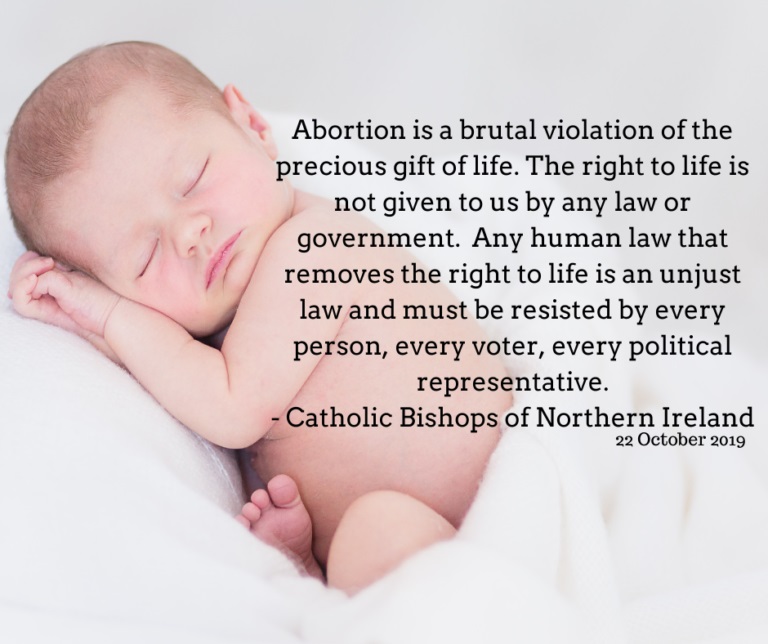 The Catholic bishops of Northern Ireland say the new abortion law allowed for under the Northern Ireland Act 2019 is an unjust law and Christians should not cooperate with providing abortion.

In their response to the Consultation on “A New Legal Framework for Abortion Services in Northern Ireland” the bishops state that no one is obliged in conscience to cooperate with “any action permitted by this law which directly and intentionally leads to the killing of an unborn child. Indeed, everyone is morally obliged to oppose this law by conscientious objection”.

In a statement issued on Tuesday 17 December 2019 the bishops state that all Christians and people of good will are obliged in conscience not to cooperate formally in abortion services, “even if permitted by civil legislation”.

“Those who have recourse to conscientious objection must be protected from legal penalties, disciplinary proceedings, discrimination or any adverse impact on career prospects,” they stated. “Obstetrics and Gynaecology must not become the domain of only those doctors and other medical staff who are willing to participate in abortion services.”

They stated that the New Regulatory Framework in Northern Ireland should provide all health professionals, including midwives, nurses and ancillary staff working in hospitals and other community settings, with the right to refuse to participate in any aspect of the delivery of abortion services. This would include consultation, administration, preparation, and the direct and intentional act of abortion itself.

Pharmacists working in hospitals and pharmaceutical outlets in the wider community should also be free to exercise conscientious objection when asked to provide or stock medications designed to assist another person in carrying out an abortion.

The bishops also add that the proposal to provide unrestricted access to abortion up to 12 to 14 weeks will in effect amount to abortion on demand.

They are also opposed to all attempts to include any school premises as an option for the provision of abortion pills or any other abortion service, in particular in Catholic schools which have as their ethos the promotion of the dignity and life of every human being.

“The provision of abortion services in our schools would be contrary to everything a Catholic School stands for with regard to respect for all citizens and the promotion of the common good,” they state.

They are also opposed to inclusion within the school curriculum of information about how to access abortion services, as they say this would fundamentally undermine the Catholic ethos of our schools.

They state that when women feel the stress of an unwanted pregnancy they should have access to counselling and sufficient time should be allowed for careful reflection on the serious nature of having an abortion.

They also say that women who face issues such as poverty, relationship difficulties, housing, child care, and safeguarding should be made aware of existing services which might help them. They should also be made aware of post-abortion services.

On 21 October 2019 protests were held at Stormont as the Assembly met for the first time in almost three years to discuss liberal abortion laws which Westminster was to impose on Northern Ireland. The Northern Ireland Assembly failed to prevent the introduction of the law which was described at the time by some members of the Assembly as one of the most liberal abortion laws anywhere in Europe. (See CInews 22 October 2019).

At the time of going to press renewed efforts were being made to allow for the resumption of the Northern Ireland Assembly.