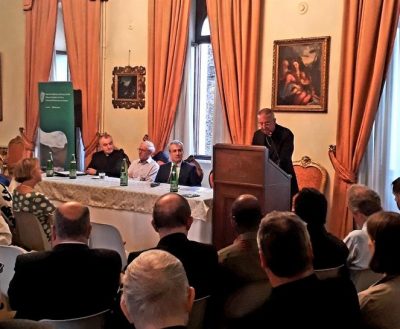 Cardinal John Henry Newman’s wish was for a well-instructed Catholic laity who were the beneficiaries of a liberal education, as expounded in his ‘Idea of a University’, Archbishop Diarmuid Martin said on Friday.

His address on, ‘The Relevance of Cardinal John Henry Newman in Ireland Today’, was delivered at the Irish College in Rome, an event co-hosted with the Irish Ambassador to the Holy See, Derek Hannon, as part of celebrations for the canonisation of Newman on Sunday 13 October.

The Archbishop quoted from the Catholic University Gazette of 9 February 1855, in which Newman was quoted as stating in an earlier speech: ‘One of the greatest disasters of modern times is the separation between religion and science and the perfection of knowledge is a combination of both … which makes men not only educated but good Christians.’

Blessed Newman, who becomes a Saint on Sunday, outlined his ideas on the laity in The Present Position of Catholics in England, where he said, ‘I want a laity, not arrogant, not rash in speech, not disputatious, but men who know their religion, who enter into it, who know just where they stand, who know what they hold and what they do not, who know their creed so well that they can give an account of it, who know so much of history that they can defend it.’

Speaking on Friday afternoon in the Irish College in Rome, Archbishop Martin said the question arises: are we fostering such an educated Catholic laity to face the challenges of living their faith in the complex pluralist Irish society of today?

He added that it was one of the most important challenges the Irish Catholic Church faces today.

Dr Martin said that one of the negative results that flowed from the failure of the Catholic University was that the teaching of theology became restricted to the training of priests in a number of independent seminaries.

Laity were excluded and seminarians were educated, in general, outside the context of interdisciplinary dialogue, which is the essence of a university.

Even where seminarians attended universities, as was the case between Clonliffe and UCD at least for philosophy, the seminarians remained isolated from the mainstream university culture.

‘A university is, by definition, a place of universal learning. Newman’s University was not to be a theological college or a glorified seminary. His was to be a true university with schools of arts and sciences, as well as medicine, engineering, classics, theology and philosophy.’

The Archbishop suggested that for Newman a university environment was one in which intellectual training, moral discipline and religious commitment would come together.

‘The lesson that comes from Newman is that there is a sense in which this development of mature faith takes place optimally within a university.’

In his address, Dr Martin highlighted that Newman wanted to show his contemporaries that faith and reason do not conflict, but also that ‘reason could not be the sole arbiter of all truth’.

But he cautioned that the development of university education in Ireland ‘has lost this dream of Newman’.

The main universities proclaim themselves to be by definition exclusively secular and shun any real place for religion in their culture, he criticised.

On the other hand, adult faith formation suffers because it is deprived of the interdisciplinary nature of a university.

‘Irish culture is becoming impoverished by a false dichotomy between religion and society and both sides of the debate are at fault. We need a new relationship,’ Archbishop Martin stated.

He said he liked the comment of the Taoiseach, Leo Varadkar, in his address to Pope Francis during his visit to Dublin last August, when Mr Varadkar spoke of a relationship ‘between religion and State in a changing Ireland in which religion is no longer at the centre of our State, but continues to have a real and meaningful role on our society’.

Elsewhere in his address, the Archbishop said that today there is a need for the transformation of dimensions of Irish culture for the sake of mature pluralism.

‘Exponents of Catholic culture have difficulty in recognising that Catholic culture in Ireland does not have the prominence that it had in the past. However, it must not retreat from public space but must live as salt of the earth in a new way.’

He said there are signs of the emergence of a new relationship and that one of the projects which will open up dialogue between faith and science, at least in a symbolic way, is linked with Newman.

‘It is the idea of developing a centre for faith and dialogue at Newman’s own University Church in St Stephen’s Green in Dublin. The rather eclectic church owes it origins and its design to Newman himself. It was not to be just the place where students could attend Mass, but it was to be the focal point of the dialogue between the faith of staff and students and the sciences taught in the university.’

He paid tribute to the University of Notre Dame for espousing his vision of making the Church today a place of dialogue but developing it also as a place of worship adapted to the search for faith in the contemporary world.

He said it was important that Newman’s tradition of rigorous independent theological thought be retained and that the project does not become the exclusive home to any single grouping of Irish religious subculture.

Dr Martin also paid tribute to the working agreement at Dublin City University in which in the Institute of Education, the largest in Ireland, includes special centres for the preparation of future teachers in the Catholic and Church of Ireland traditions.

‘This arrangement reflects the new pluralism in Irish education in which future teachers of schools of both religious and secular ethos train together within the framework of a university,’ he said.

Elsewhere he highlighted that though a traditionally Catholic country, Ireland does not have a proportionate level of theological research.

Among the laity, there is a thirst for faith formation. Institutes like the Priory Institute of the Dominicans provided a range of distance learning programmes and these are being repeated elsewhere in Ireland.

Recently the Irish bishops held a special meeting to look at the future of faith education and education for future ministry.

He said they have come up with an initial framework for a renewed vision of where this education should take place and the role St Patrick’s College Maynooth can play.

‘Maynooth has the potential to play a new role in forming a future Irish religious culture. As it stands, however, it does not fulfil the basic acquirement of church law to be a Catholic university as it effectively at the moment has only one fully active faculty. A university is, by definition, a place of universal learning. The bishops, however, envisage a renewed and strong place for Maynooth in Irish church life,’ he said.